The morning getting out of Zubiri started out well. First, because the cash machine in town was out of order, I tried to have the largest breakfast I could muster at the cafe across the street knowing they take credit cards. Bob from outside Toronto and I were there at 6 am sharp thinking the rest of the party would join us shortly. We had a great time talking about the Camino, military service (his in the Canadian army compared to my husband’s as a US Marine), and seriously smart analysis of American politics and how screwed up things are. Political discourse using facts and logic instead of name-calling was invigorating. I wish I could have conversations with people like that at home, but everyone has become so deeply entrenched in their own versions of the “truth”… I should stop now.

Here’s what I had for breakfast. I had it for lunch when I got into town the day before as well. I thought it was pork. No, it’s delicious, fresh, large chunk tuna with green olives, onion, in a pie crust! Yum! I need Al to figure out how to make this when I get home (gluten free so he can enjoy it, too): 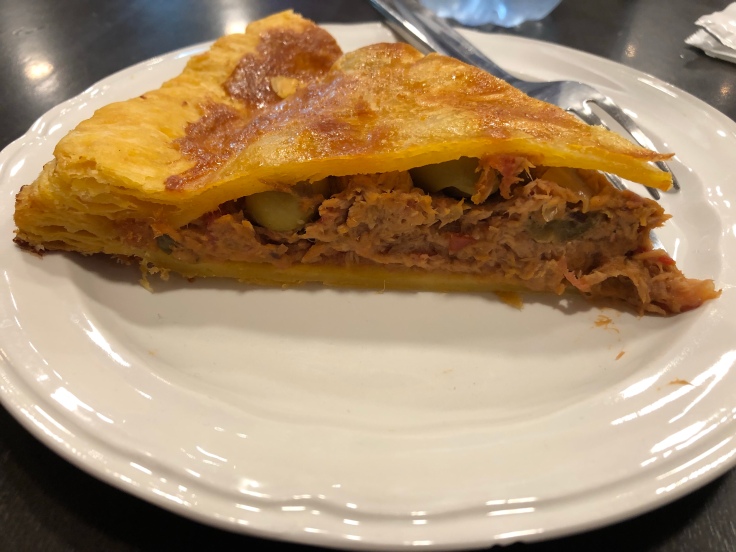 The rest didn’t make it over for breakfast in time, so Bob said his goodbyes and shot out the door. As I was leaving, I ran into Kitty and Wilma just walking over. It was 7 already and I was determined to reach Pamplona, so we said our goodbyes on the stairs.

As much as I’ve enjoyed walking with new friends, I also enjoy walking by myself and think I may cover more ground. Music helps a lot. So does knowing that when I stop midway up a hill to curse, no one is witnessing it.

It is sad to think that I may never cross paths with my new friends every time we depart, though. Kathleen from Australia is now a day and a half ahead of me (I assume). The Texas sisters are an hour ahead of me (again, I assume since they tried the washed out path and never turned back to Zubiri), Bob is speeding along ahead of me somewhere. Kitty and Wilma are an hour behind me. Ian is somewhere. Lesson of the Camino: even though you bond with people and make friends, you also have to remember that we are all independent and need to be able to say goodbye and Buen Camino. Have faith our paths will cross again.

It was still dark at 7, so I actually had to pull out the headlamp (Al, it got used!).

Here is the crossing that was washed out yesterday, blocking the path. The river itself was about a third lower, so I can only imagine what this looked like. I put both poles in one hand, grabbed the rickety wooden rail with the other, said a prayer and essentially hop-danced through it. It would have come up to my shins if I had done it slowly. I was like Popeye running across the surface, barely hitting the submerged rocks under the rail. How in the world did the Texas sisters manage it yesterday?

A pilgrim asked me to take his photo at the top of a ridge, so I asked him to do the same. Look! A real photo that’s not a selfie! 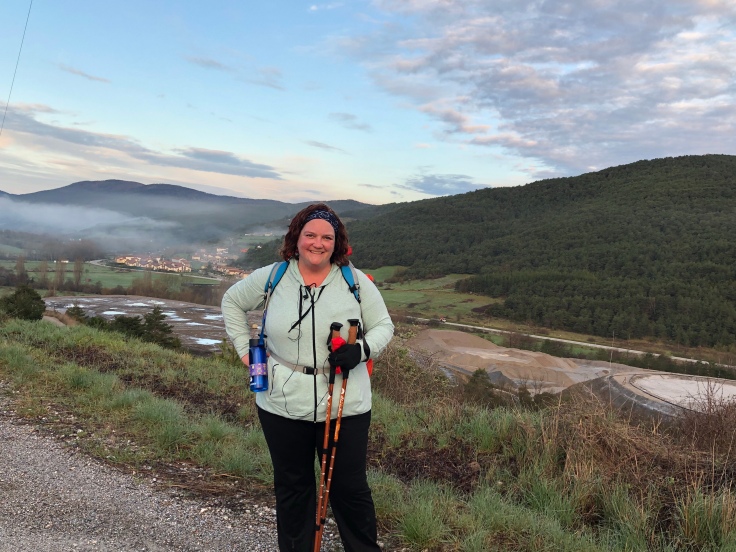 I wonder if that town has an ATM that works? Doesn’t matter, the path never got close to it.

I passed by a massive industrial area. All of the guides complain about this section as ugly, a blight, etc, but I actually found it interesting. To me, it is a sign of an economy, a place where people work, and it brought a bit of comfort to the city girl in me. I’m alright with seeing industry. 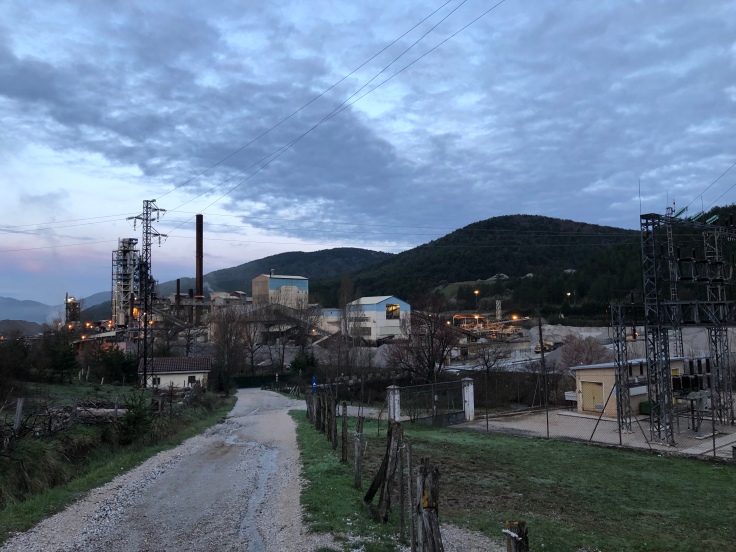 The rest of the walk was muddy, wet, hilly… you know, same old, same old. There were some serious moments of beauty, though.

The hotel featured in the Martin Sheen movie The Way:

And of course, that cat that wouldn’t get out off my lap. He was making me a bit nervous because he wanted to use his claws to “knead” my legs. Cat scratches on me tend to itch and/or get infected. No, kitty! Bad! However, he grew on me. Al, I think it’s time to find the next house kitten after I’m home.

Part two in a bit. My phone is really struggling to upload photos today — on data and Wi-Fi. It’s taxing my battery, too. Hmm.