I didn’t mean to come off negative about the meseta yesterday; I was trying to communicate how surreal it was with the color of the sky, the silence, the desolation, the isolation (until the two kids in dirt bikes came through).

Today was day two of crossing the meseta, but a completely different experience because I was surrounded by other pilgrims the entire way to Castrojeriz.

I now think that what added to the creepiness yesterday was the fact that I couldn’t see a soul in front of me or behind the entire stretch (again, until the dirt bike kids snapped me out of it towards the end). The only other time I experienced that feeling was when I walked from Puenta Reina to Mañeru. There was no one in front of me or behind me, and it was very isolated. You could not see the trail from the highway. (Fun fact: that same section was closed the following day because the river flooded the path. Kitty and Wilma were put on a bus to get past the section.)

Today it was a party.

I played leap frog and took foot/water/beer breaks with Alison of Chester, Juan of Brazil, Gary of Switzerland, Frank of Germany, Jan of Australia, and Karen & Andy of somewhere in the UK (by their accents I’m guessing London or Wessex).

Some pics of the landscape: 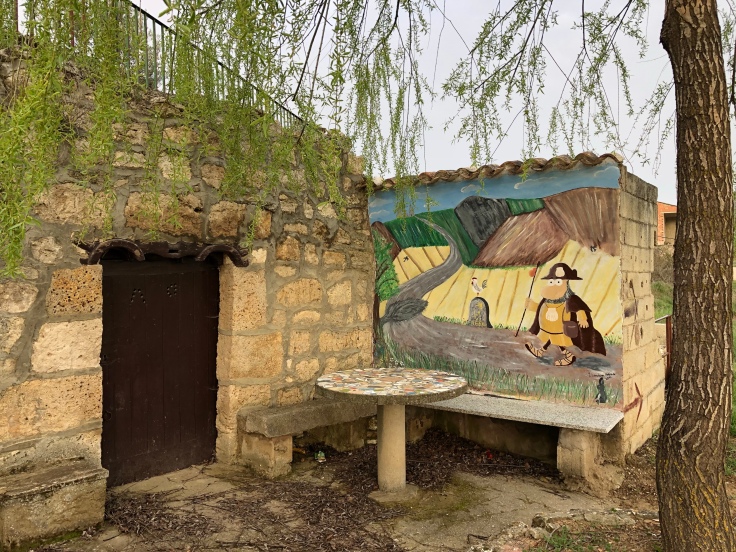 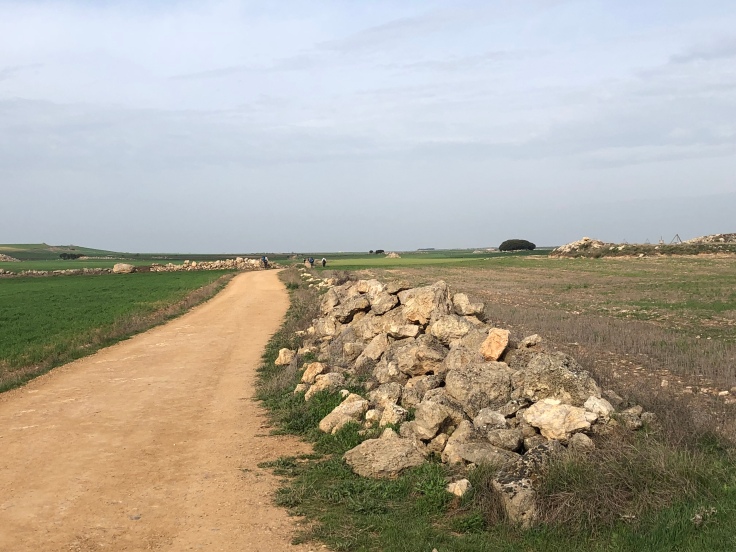 I’m so curious about the geological history of this area to create such crazy rock formations and scrubbed, flat stretches of land. I almost imagine a similar geological event as what is suspected in Eastern WA millions of years ago (the theory of an inland Montana sea breaching and flooding Idaho, Washington, and Oregon). 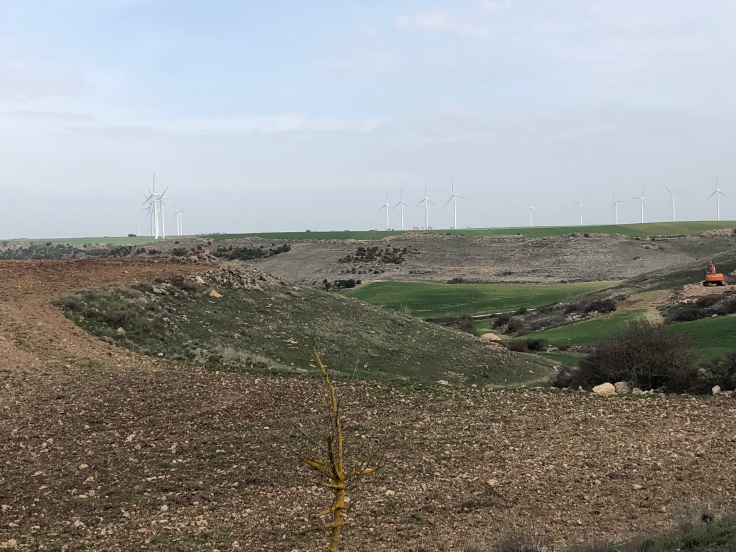 After about 11-12 kilometers of this scenery, the path suddenly dropped into the village of Hontanas.

Check out this little medieval chapel to St Bridget just above the village: 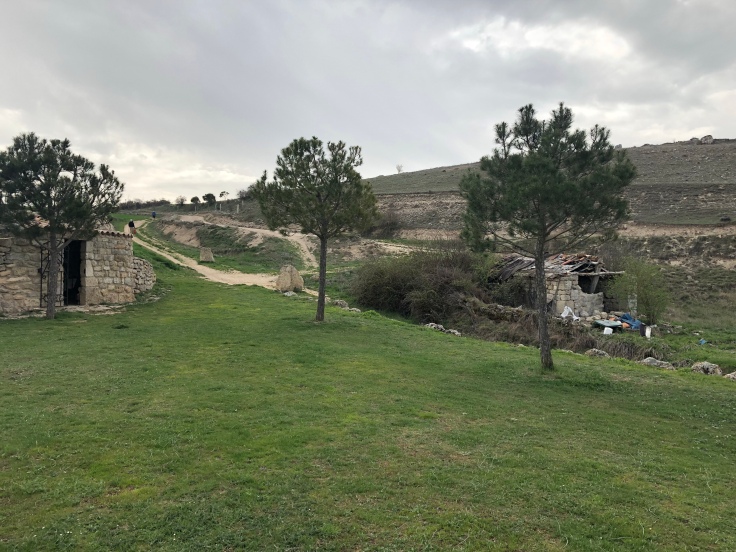 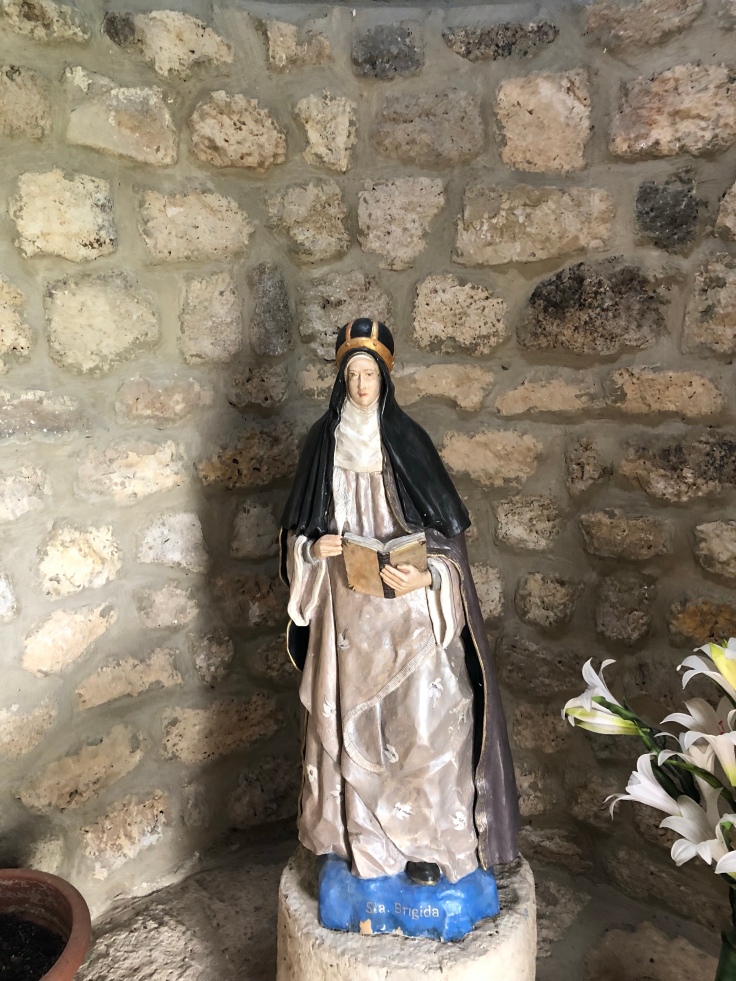 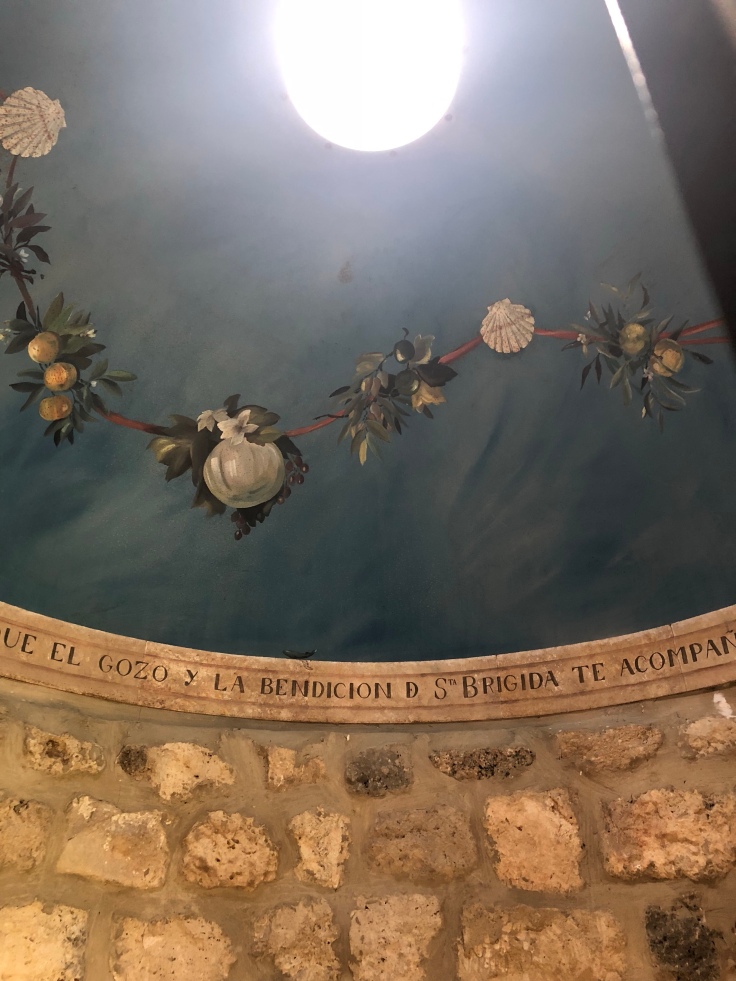 Just as I was leaving it, a German woman came running up asking if it’s a loo. No, I told her, it’s a chapel. “Oh I really have to go, this will have to do” she said as she started to drop her pants right outside the entrance to the chapel. For the first time in my life, I had to utter this sentence:

She didn’t care so I left. There was a bar with a clean banos literally 100 feet down the path. Ugh.

When I took off my pack in the town, this is what I saw. Notice anything different? 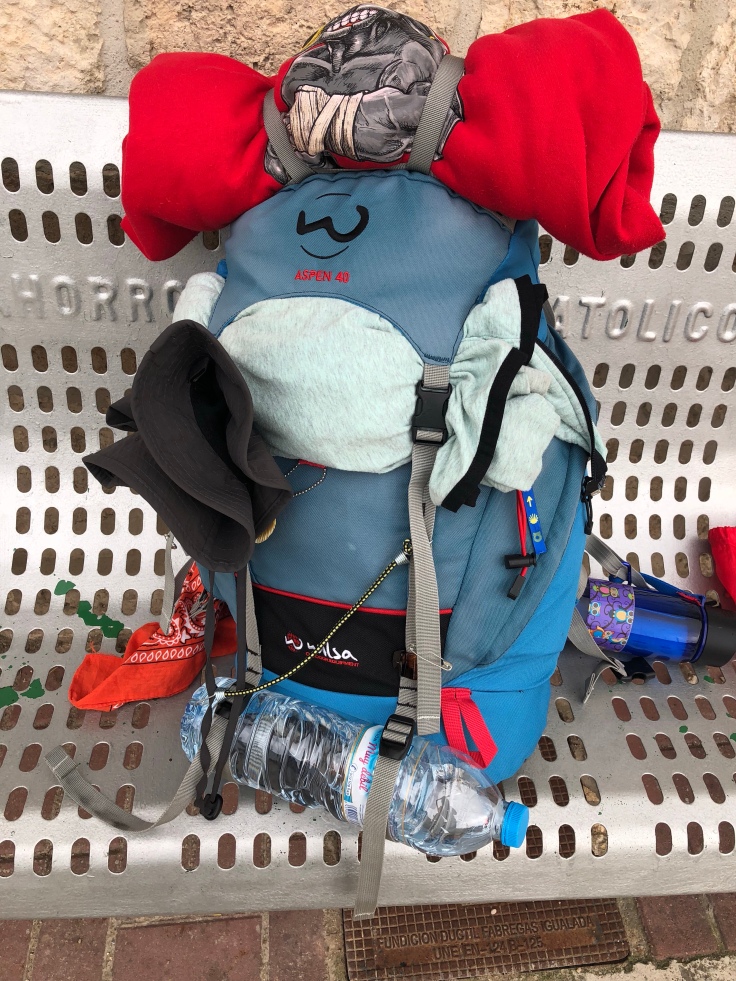 The mini bungee cord is there but not my boots! They must have dropped somewhere on the path and I didn’t notice.

YOU HAD ONE JOB TODAY, BUNNY!

I guess there’s no longer a question of hold onto them or ship them home. They are now a part of the meseta.

A mural on the side of the village swimming pool. It is one of those “half empty or half full” puzzles:

It started raining so I put on my pack cover and pulled out the poncho. One mile later, the rain stopped and it suddenly became incredibly hot and intense. Dropped the pack to take off the cover and put on my hat and sunscreen. This rain-hot-sun-rain pattern happened one more time. Geez, is this a Seattle spring day?

After a long period of hot sun when I just started to curse the weather, a wonderful oasis came into view:

This, my friends, is the ruins of Convento de San Anton, a 14th s ruins that once provided services and medical care for pilgrims.

Note in this next picture the pilgrim with a toddler on his back. We were all impressed. 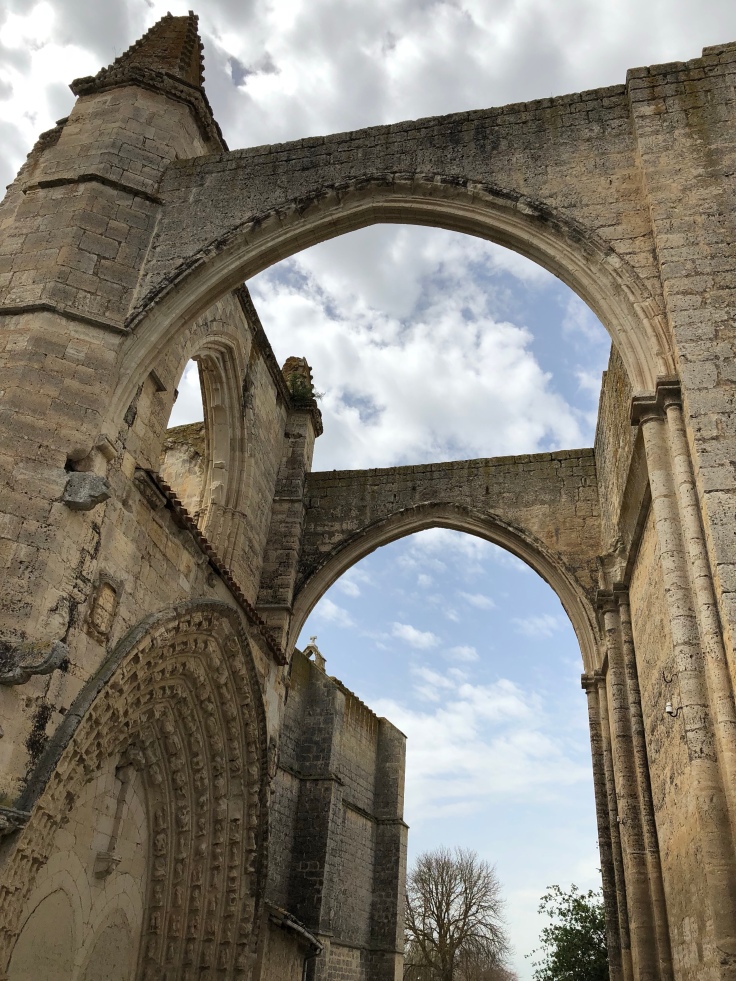 And then the most amazing space opened up to the right of the road that went under the abbey arches. A cafe with loud wonderful music, shaded tables, clean banos (in one of those trailer type banos), and 1€ beers. Eventually the whole group I had been walking with found their way there. We all kicked off our shoes to let our toes breath and just sat and enjoyed. It was probably the best trail break I’ve had in days.

Just a few minutes of walking, and our final destination came into view: Castrojeriz.

Remind you of anything? 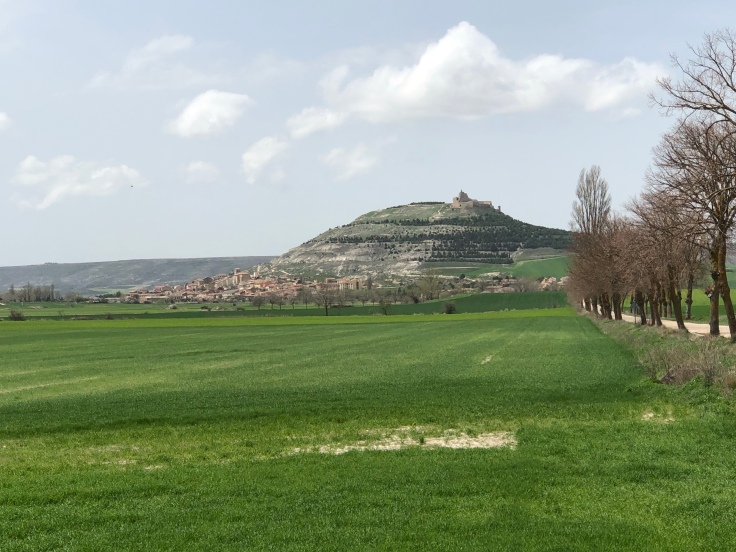 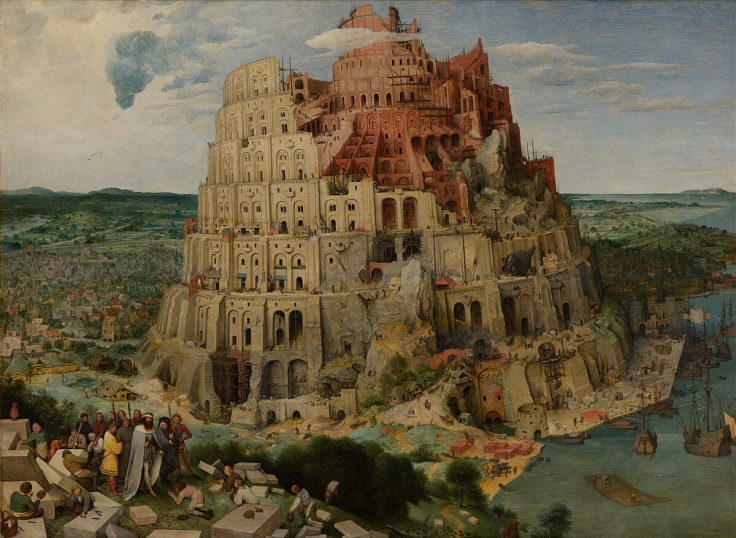 When I finally found my accommodations (which took longer than it should have because there is NO cell service in this village), I panicked a bit. It’s actually a campground. Uh oh, booking.com what did you do to me? Once I checked in, the guy grabbed my pack and threw it into the back of a car, saying this is easier. Oookaaay. Well, it is what it is, so I jumped in the passenger seat. Turns out what I secured was a “cabin” all to myself at the edge of the campground. I swear, it’s literally a two bedroom apartment! I kept asking him “are you sure this is all for me?”

He told me they rent them out for 100€+ in the summer, but right now it’s only pilgrims they see which is why I got it for 40€. Yes, it is the most expensive “room” I’ve had the whole Camino, but I get it now. 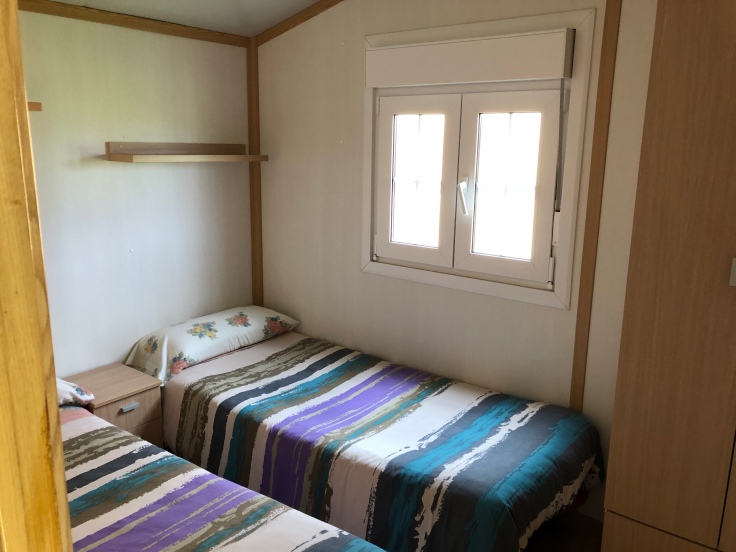 I’m about to go into town to eat dinner and just saw a flash of lightening. Tomorrow is going to be interesting!!

One thought on “The Meseta— to Castrojeriz”