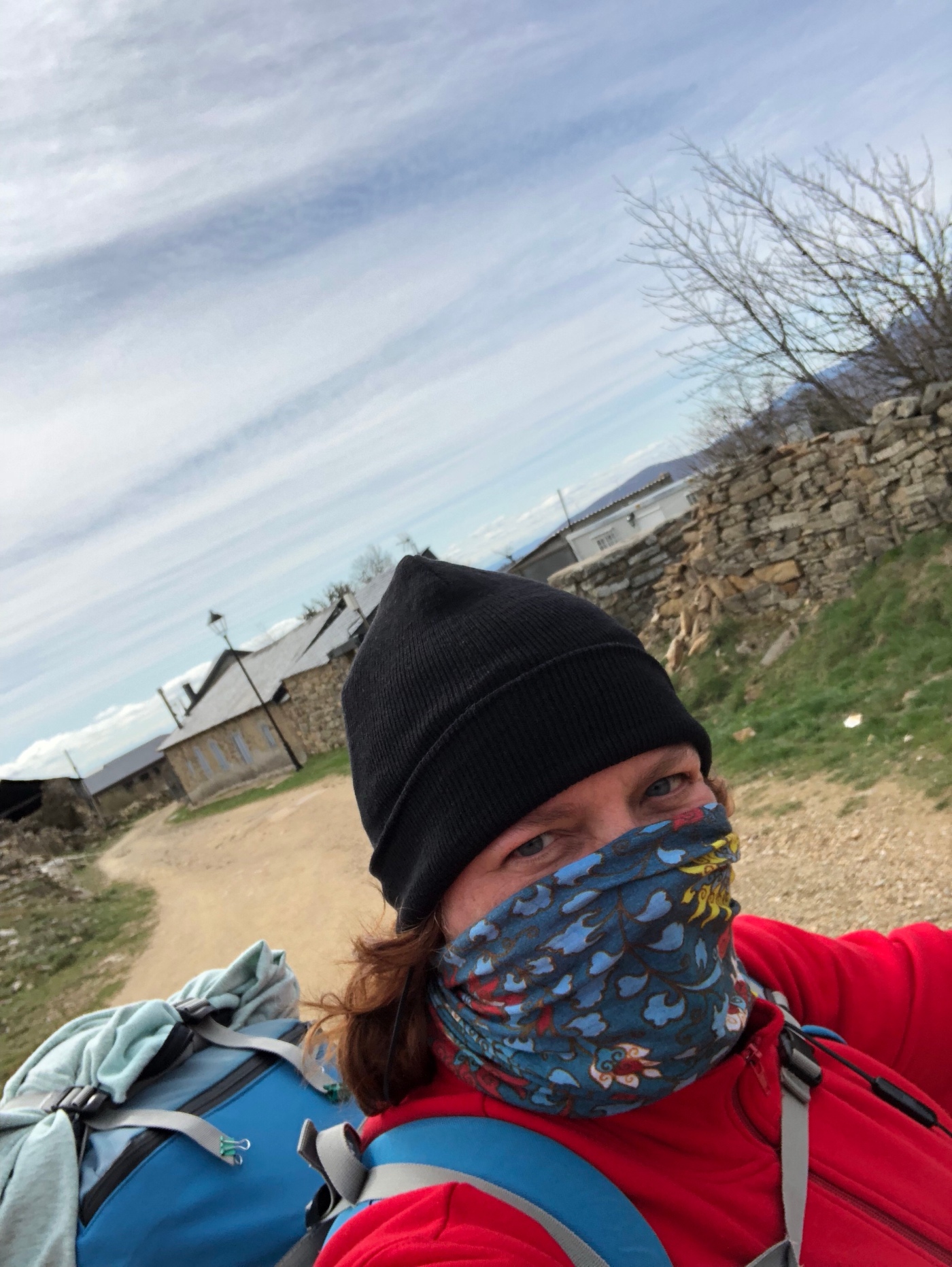 It was a good day for most of it (and emotional finally reaching Ferro). The climb up wasn’t as bad as I anticipated… but boy was the climb down surprisingly challenging! The most difficult descent I’ve faced, and I’m not off the mountain yet! (Spent the night in a village called El Acebo.) I decided I would rather walk alone in general, but I still walked with friends from Germany and Florida, kind of. We met at the same stops for coffee in the morning and beer at the end, and took random breaks together, but the implied understanding was that everyone walks at their own pace. It was perfect… especially the way Andreas from Germany grew wings and literally flew down over the rocks at the end. Beer was calling. 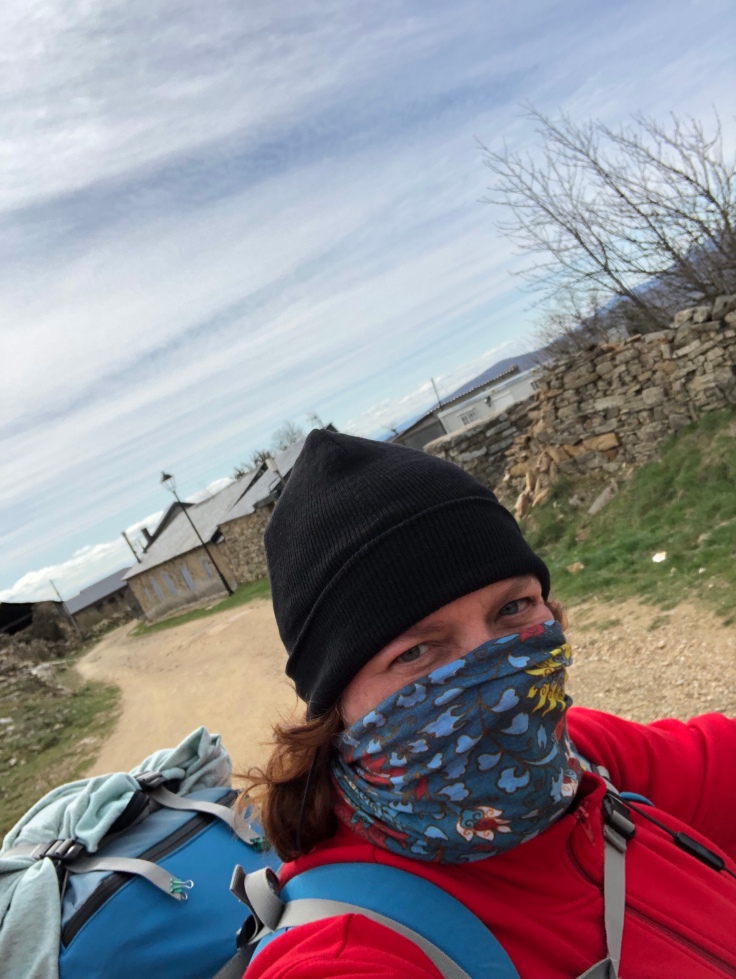 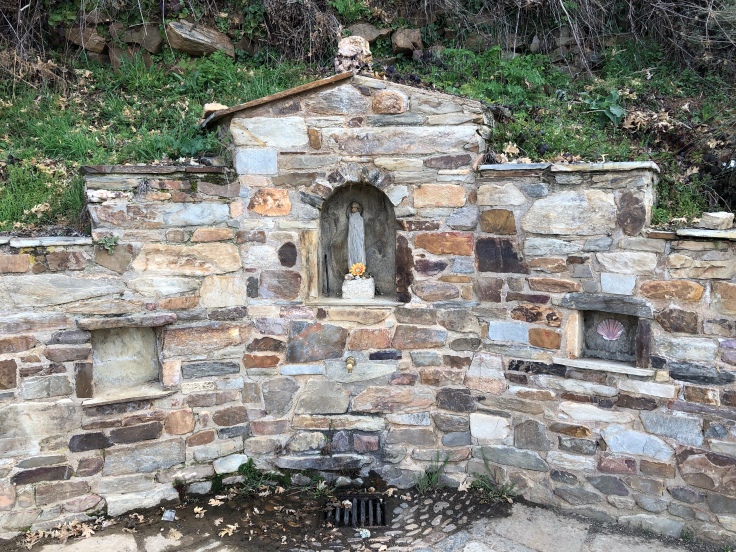 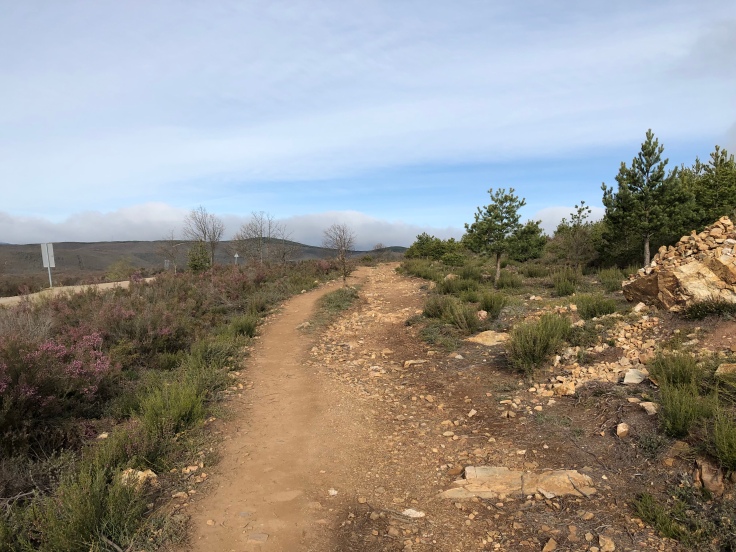 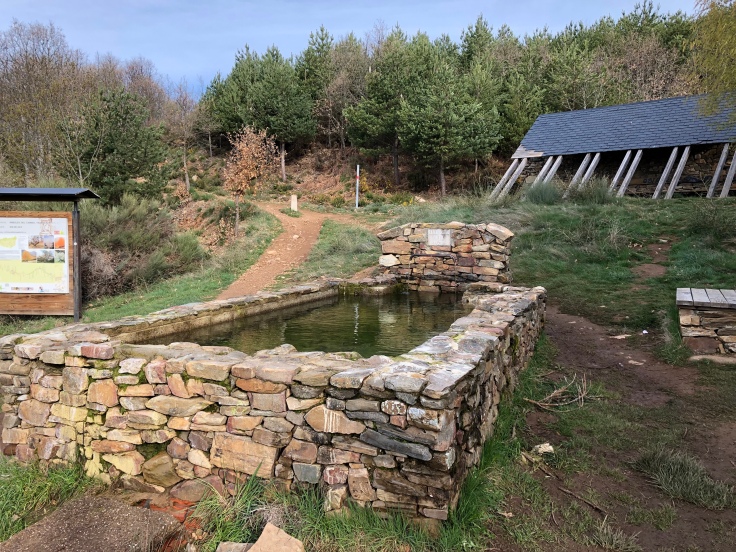 First reminder of the day that people die doing this: 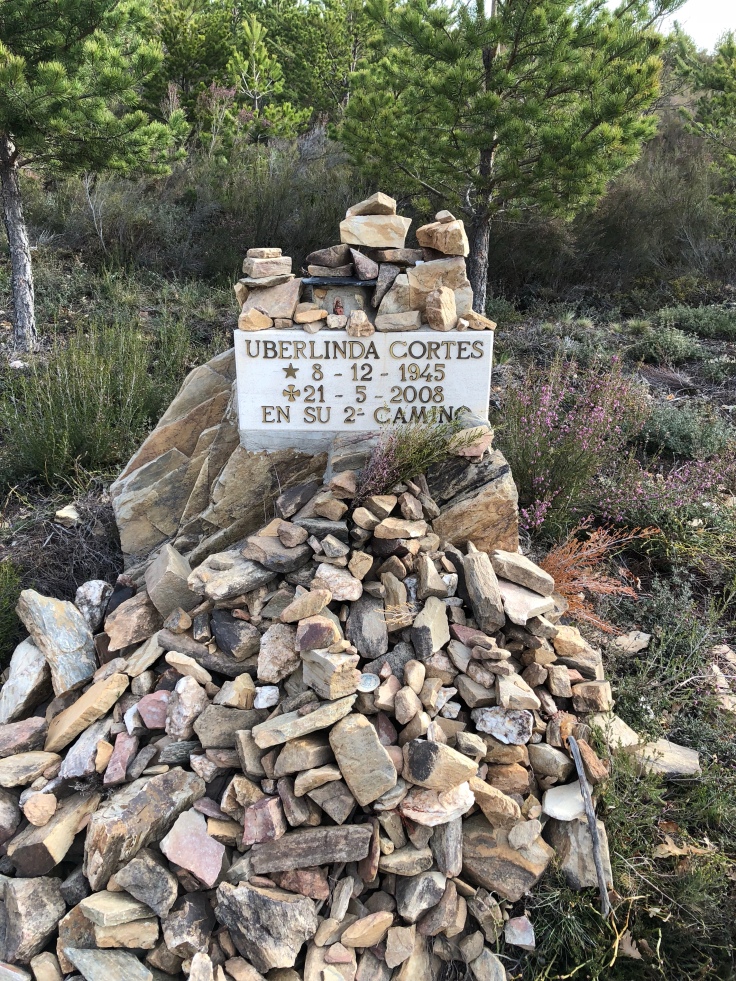 A true ghost town. Just row after row of demolished ancient houses. And check out the roof repair job. 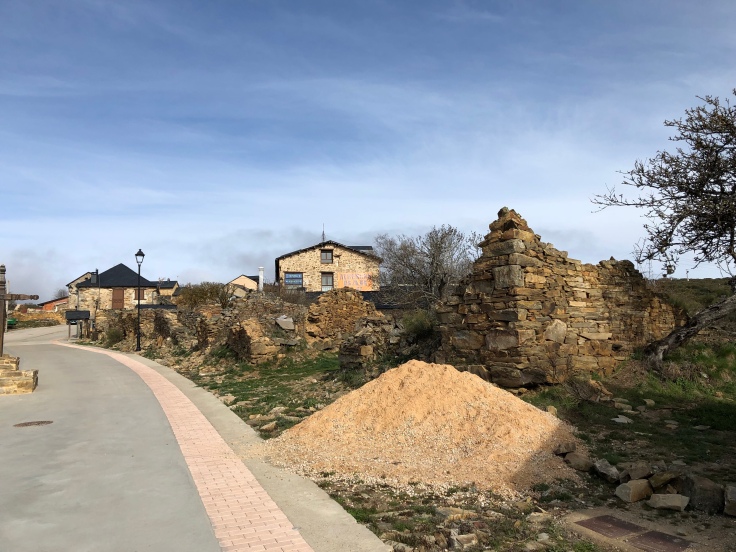 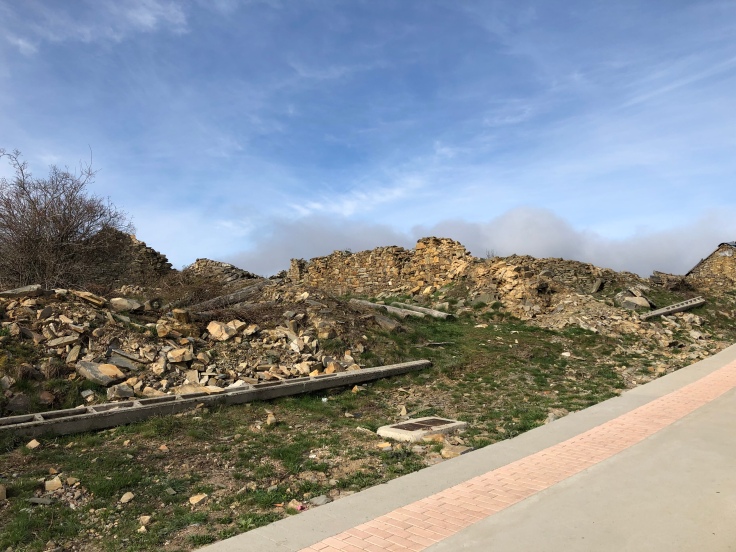 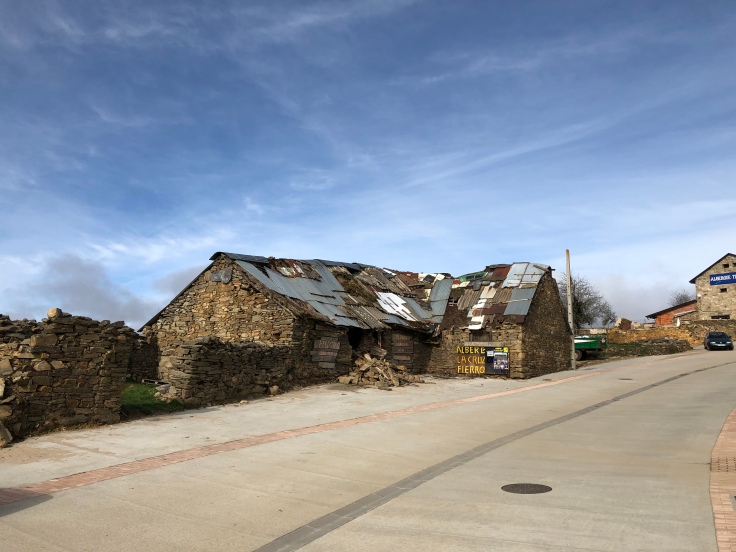 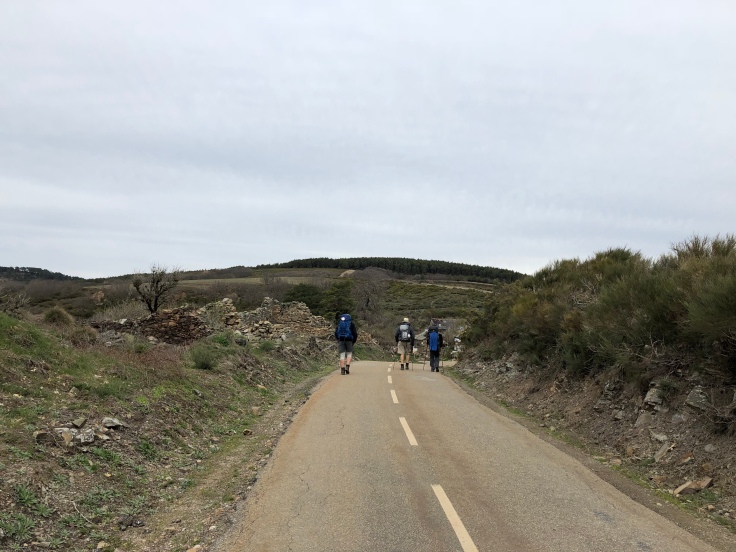 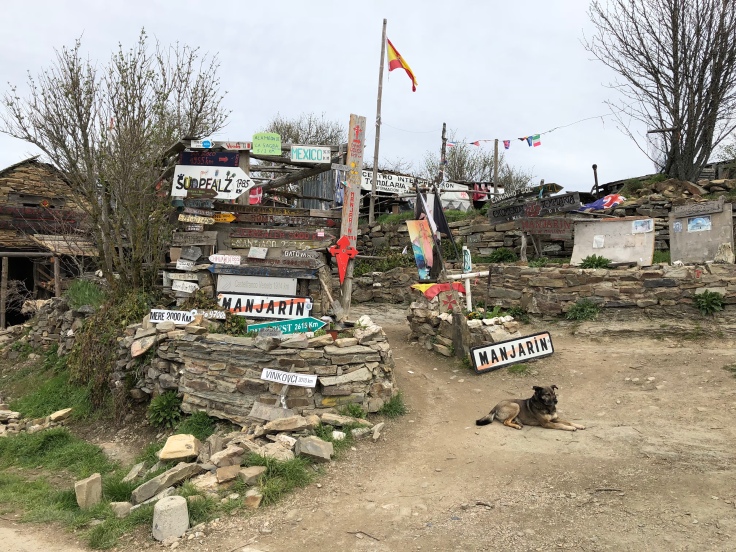 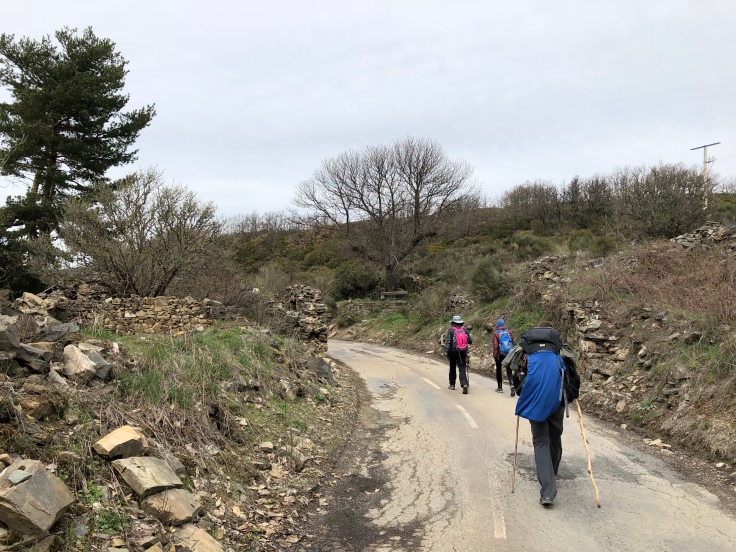 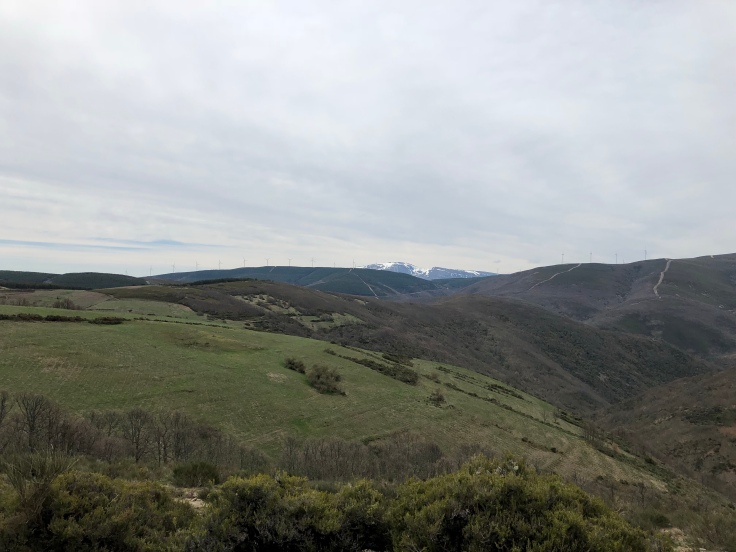 Second reminder of the day that people die doing this. This poor kid was younger than my son.

The beginning of the descent from the highway. When I went back to the path, it was grizzly. The city in the distance is Ponferrada (so you see their nuclear power plant?). 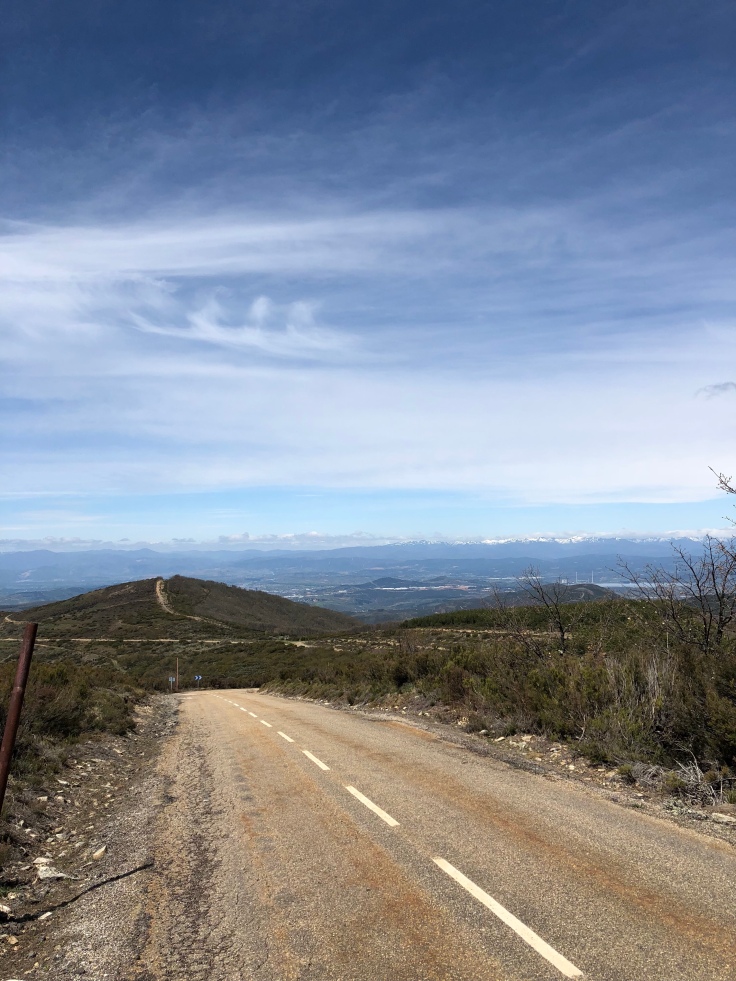 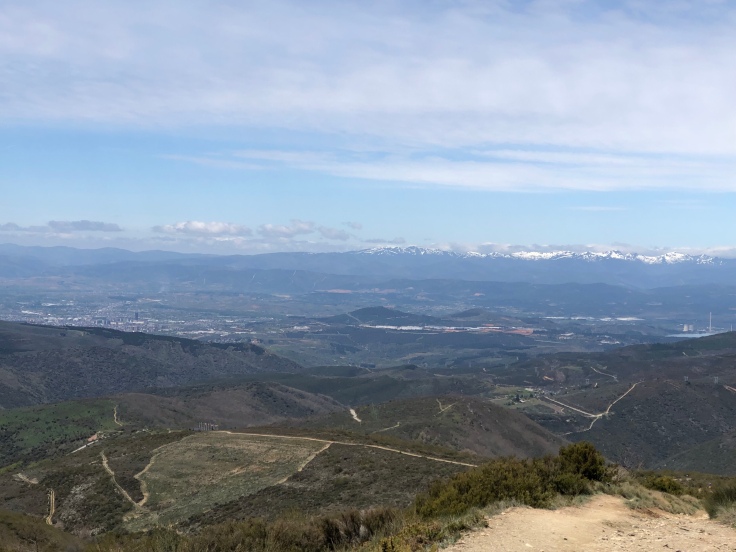 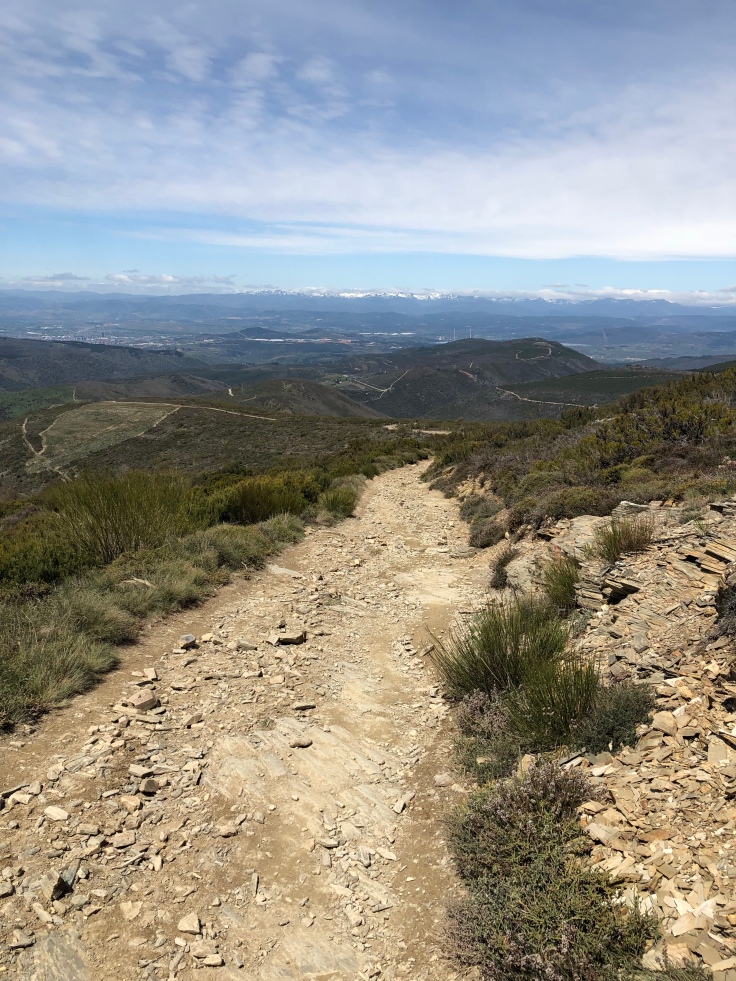 The last pic is the last shot before the trail got downright dangerous. I really wish I had a GoPro attached to my head to capture the rest of the descent into El Acebo. The book and app both warned that the descent was extreme, but I didn’t understand exactly how difficult it would be — the path was super-steep for miles and covered with large loose rocks. It was a killer for my ankles and knees, and I found myself inching down veerrrry slowly.

I made it to the village. Barely. I saw one person sitting on the ground with people surrounding him. I think he fell. Later I met a woman from France with a bandages on her head. Yes, she fell on the rocks too.

I felt like this three-legged dog limping into town. I kind of know how you feel, buddy. 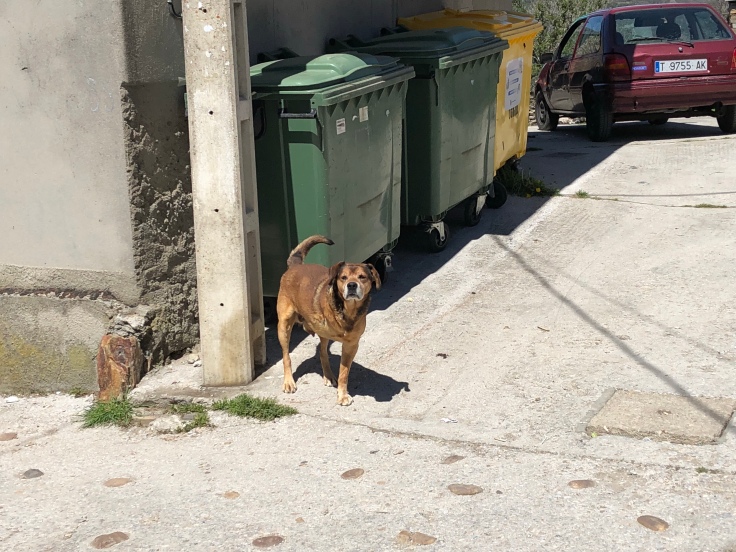 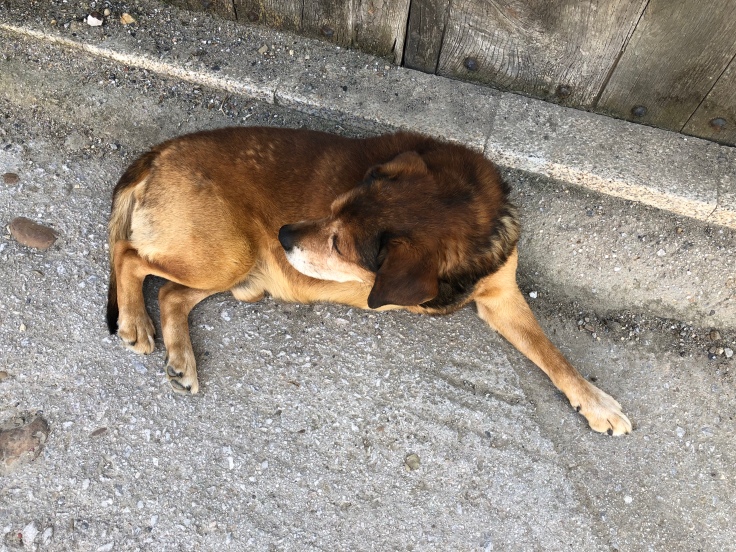 My beautiful room with a king size bed and a wonderful view of the mountains I just crawled down. It seems to be decorated as some sort of romantic getaway room. 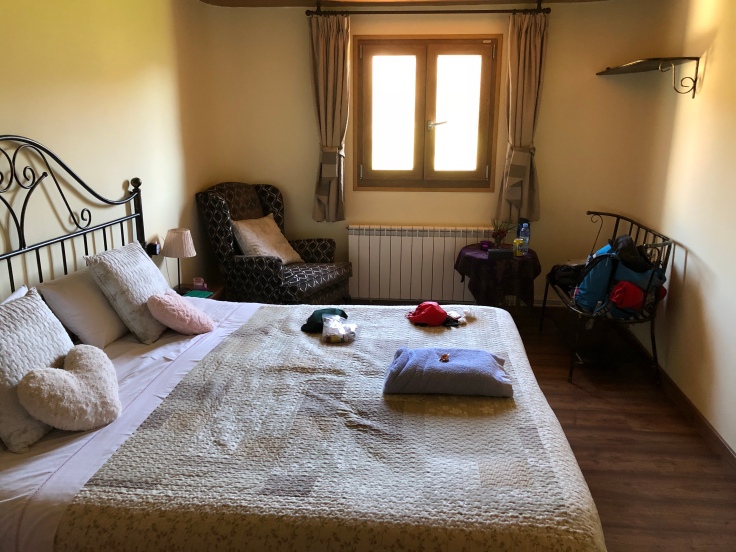 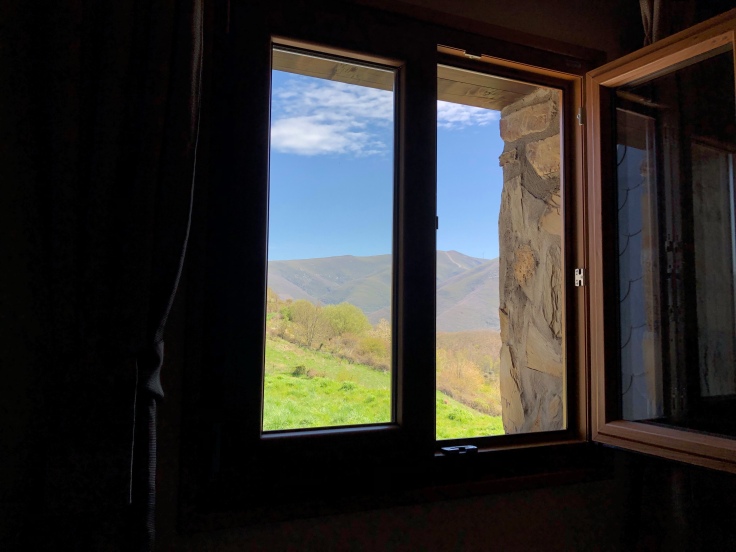 This is a wonderful little medieval village with pretty much no services. I’m still glad I stopped here, though. My ankles and feet are incredibly sore after that downhill rock climbing. 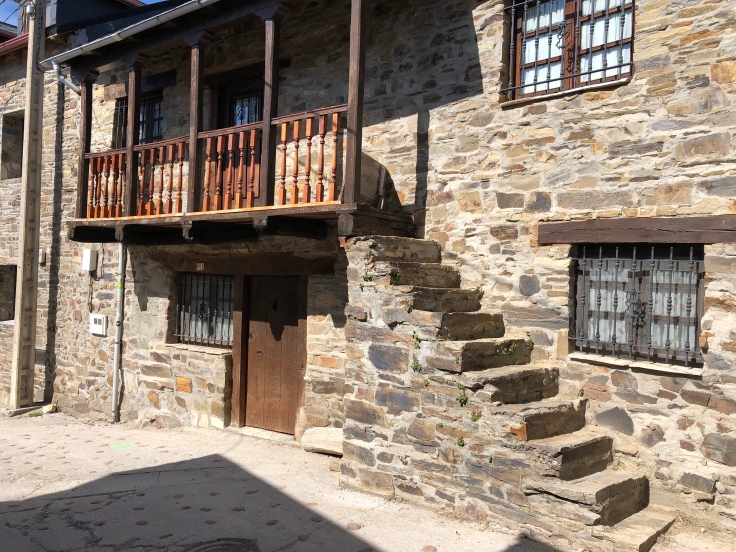 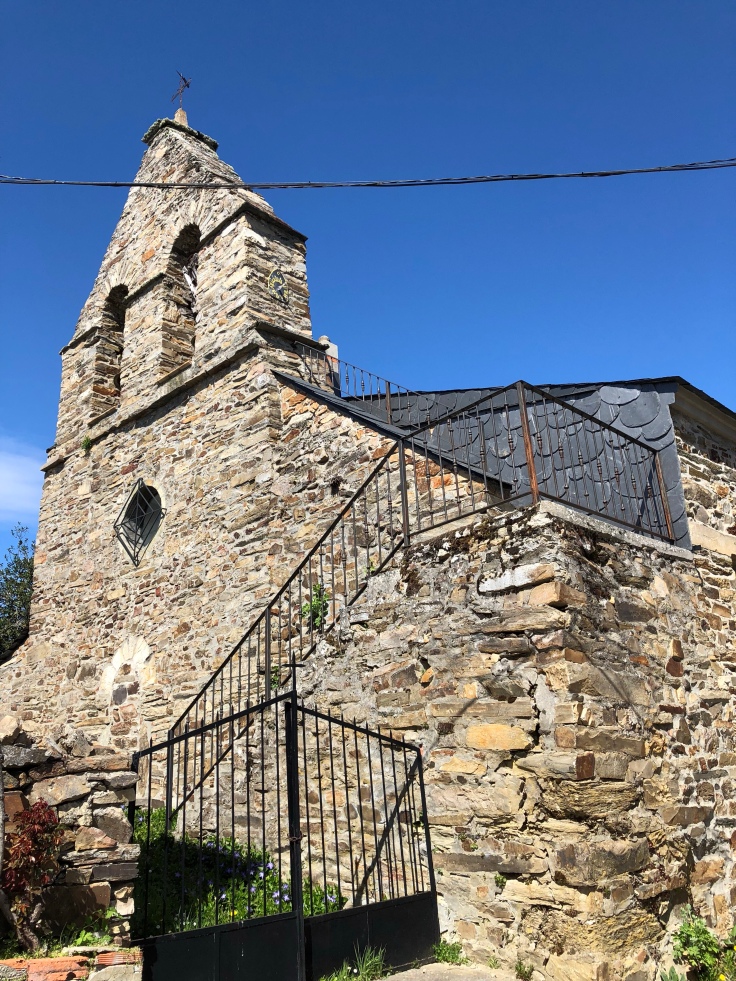 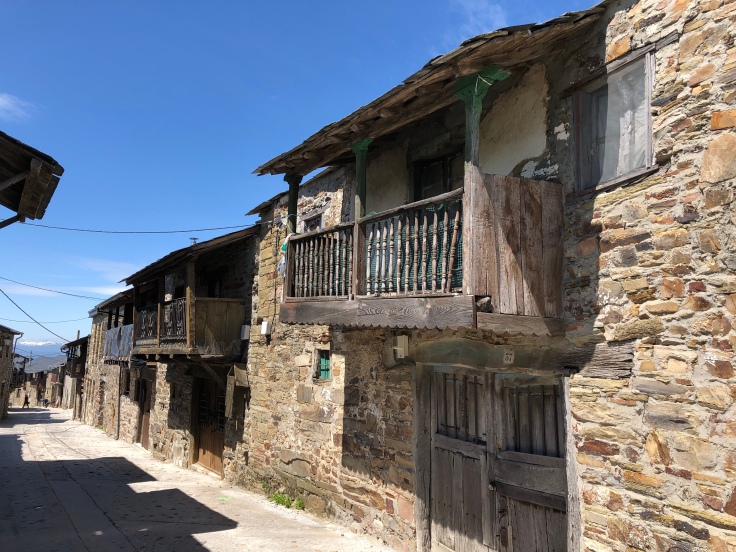 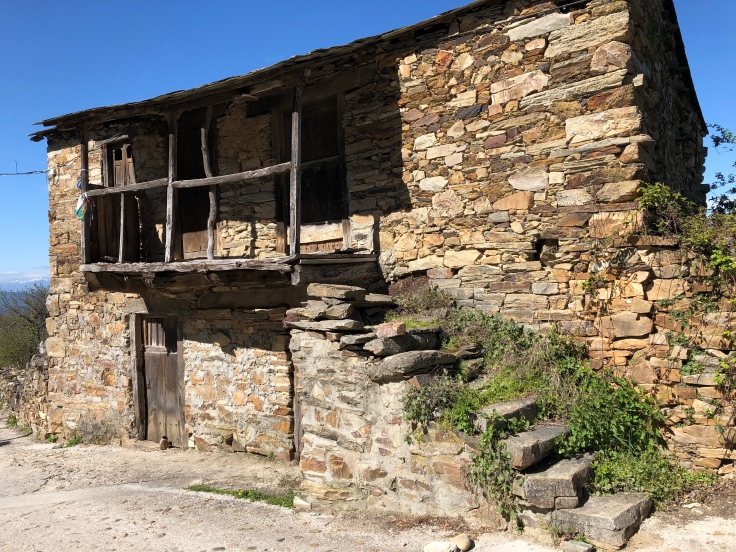 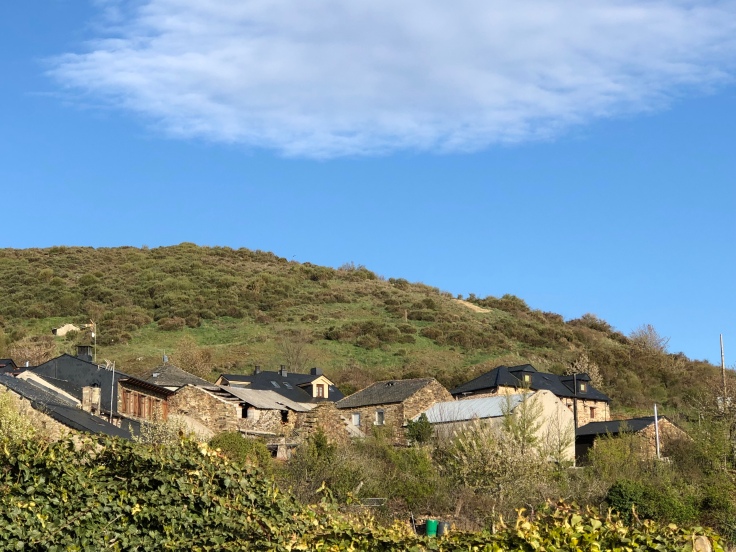 And finally, for my vegetarian friends. Tell me when you see it. 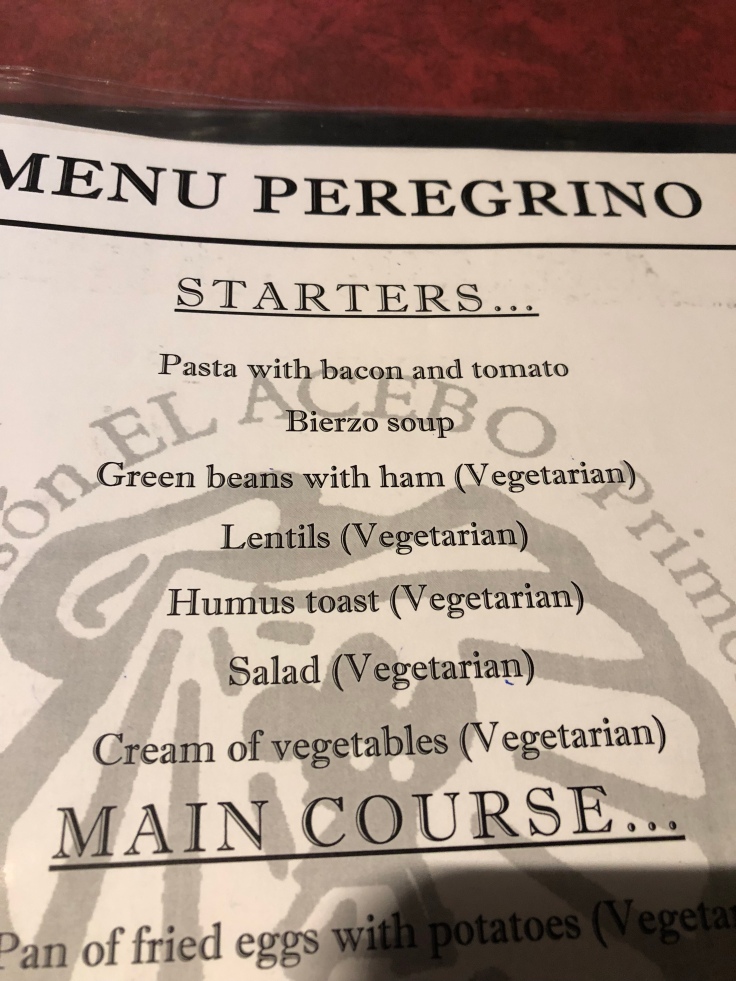