(Warning: last picture is not appropriate for my veggie/vegan friends)

So, yeah. The rain in Spain…

I was born and raised in Seattle. Rain is absolutely no big deal. In fact, as I wrote before, after climbing through the Pyrenees in what felt like 90 degrees for two days (with the sunburns to prove it), I welcomed the rain. I was quoting Chaucer in celebration! In my modern reality, I only quote Chaucer on Valentines Day to remind my single friends that the holiday is not real (checkout Parlement of Foules for more info). I was very happy for rain yesterday.

I was still happy for rain this morning as I left the B&B, but what I didn’t think about is the consequence of rain in this region.

Check out what I faced just trying to leave Bizkarret, less than half a mile from where I stayed: 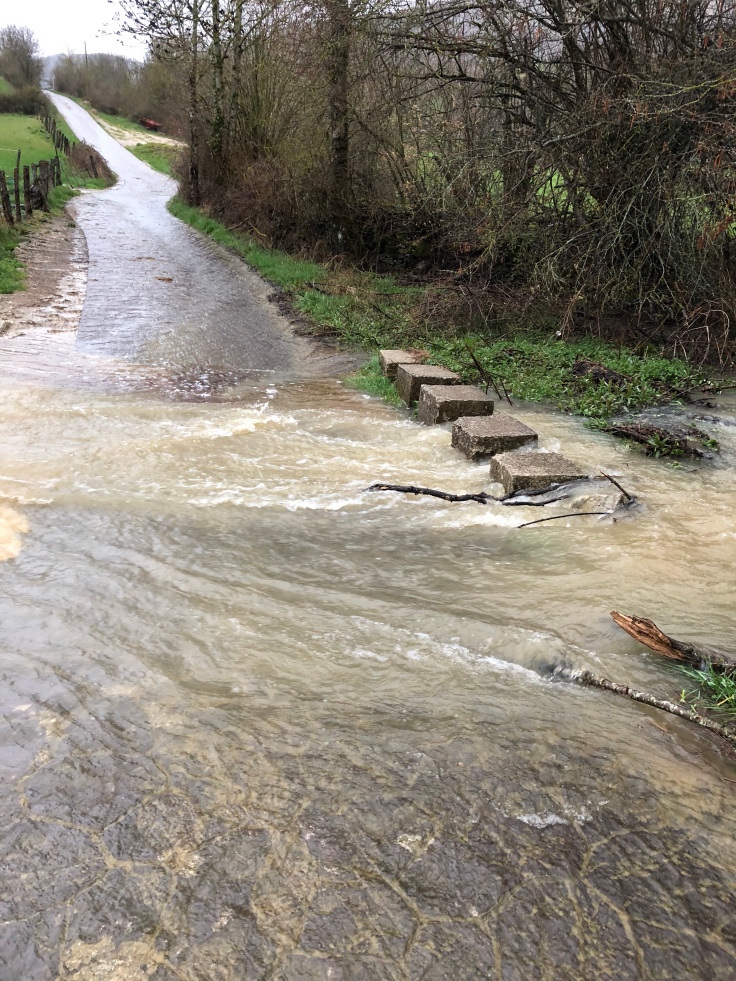 I worked on this problem for about ten minutes. I stuck my poles into all areas of the creek that I could to see if anything was shallow or stable enough. No, the poles sunk right down. Curse words were uttered. Really? At 8 am this is what I have to face? I have to walk ten miles over a mountain today, but first I must wade through a rushing current up to my knees before I even leave town?

That, my friends, is a highway sign at the top of the hill. I quickly doubled back up to town and walked along the highway, over the highway bridge, then found the trail again just past that sign. The Camino provides!

It was so wet today. No big deal. I can handle it.

But that wrecked foot bridge was not the first challenge. As I started the climb out of the next village called Lintzoain, I faced a creek of water running down the path towards me.

Here’s the valley I climbed out of before the rain just started pouring. It was beautiful! 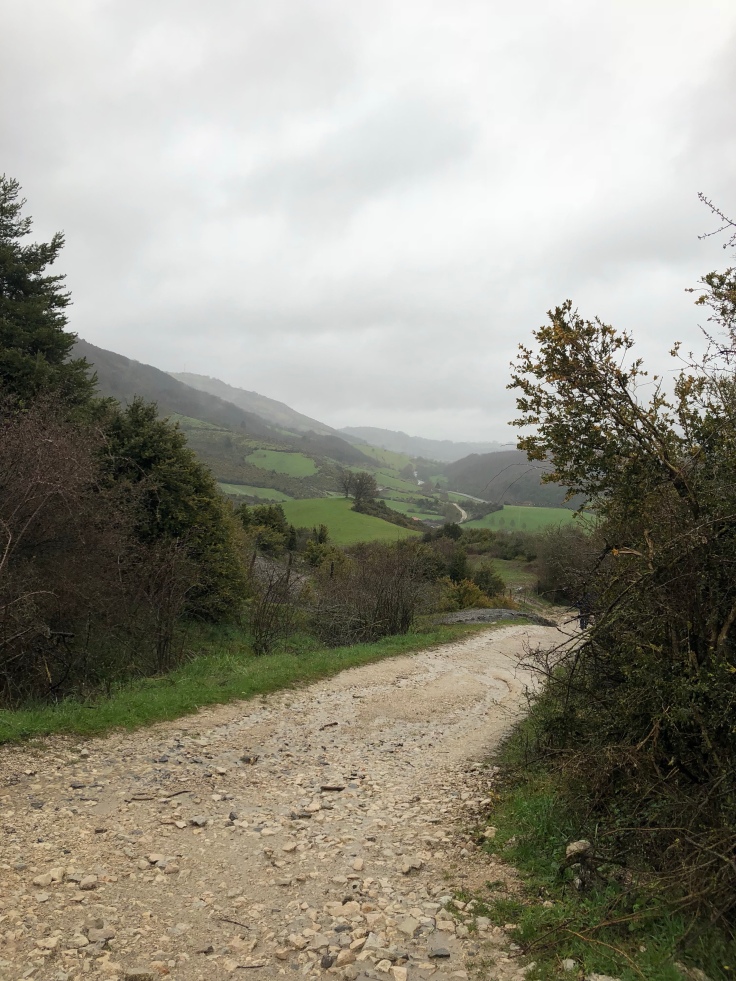 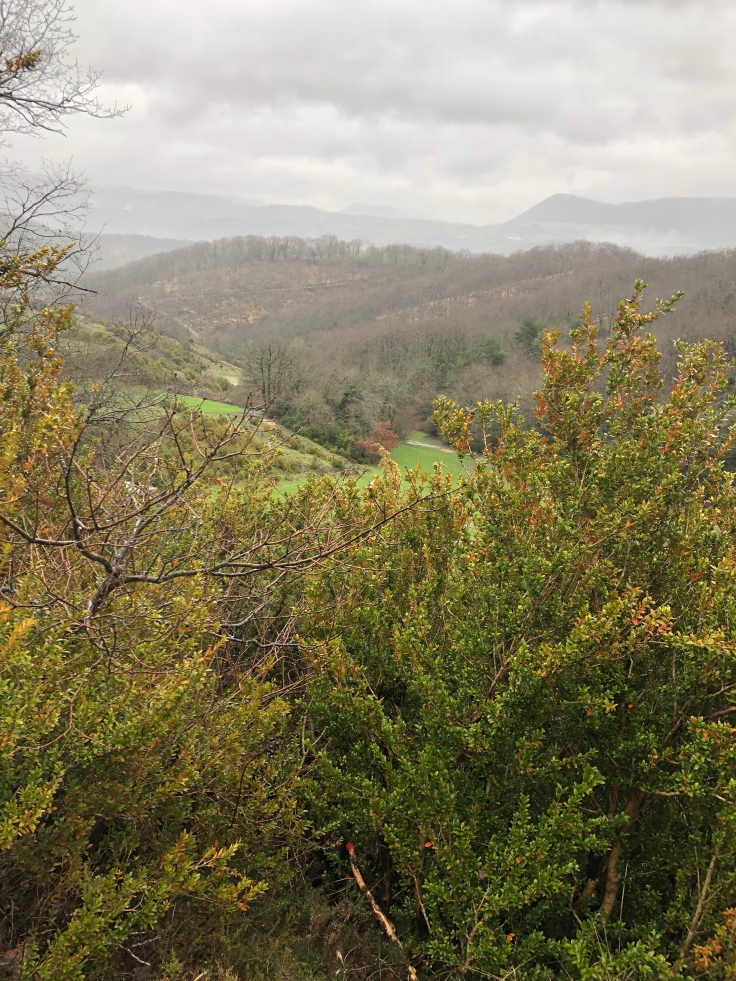 I didn’t take very many photos after this because it was just so darn wet.

I really had to start concentrating on my feet because I was starting to slip and slide on the terrain. With my nervous ankle always on my mind, I had to get out of my head and get a groove going. Time to listen to some tunes (and for the worrywart friends out there, I only wore one earbud so I could still hear things around me). I have one of those monster-sized random playlists in my Rhapsody app — perfect for the job.

Sonic Youth helped me trudge through the mud pits (twice I was afraid I would lose a boot to the suction). James Brown got me up a rather treacherous climb that had a torrent running down the middle of the path with thick mud on the sides (“get up offa that thing!”). Daft Punk had me marching directly through the streams since the flat exposed granite rock on the sides were as slick as a Seattle street after a snow storm. NWA, Gaga, Gorillaz, San Lachow, Soundgarden, Digital Underground, ancient Madonna– they all carried me through the rivers, mud, puddles, and slick rocks.

Then I came across a stark reminder that the Camino is no joke.

There’s really nothing to say except “Oh yeah, people die doing this.”

At the summit of Alto de Erro right where the Camino bisects the highway was an incredible sight for sore eyes: a food truck! I really needed lunch: 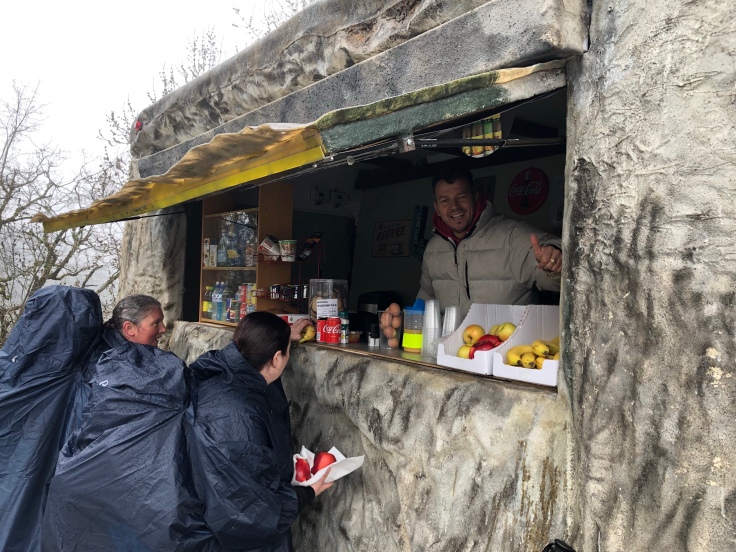 The two women ordering in the picture are Kitty and Wilma from the Netherlands. Really nice ladies!

My neck hurts more than my feet or legs tonight, probably because I had my head down watching my feet the whole way. 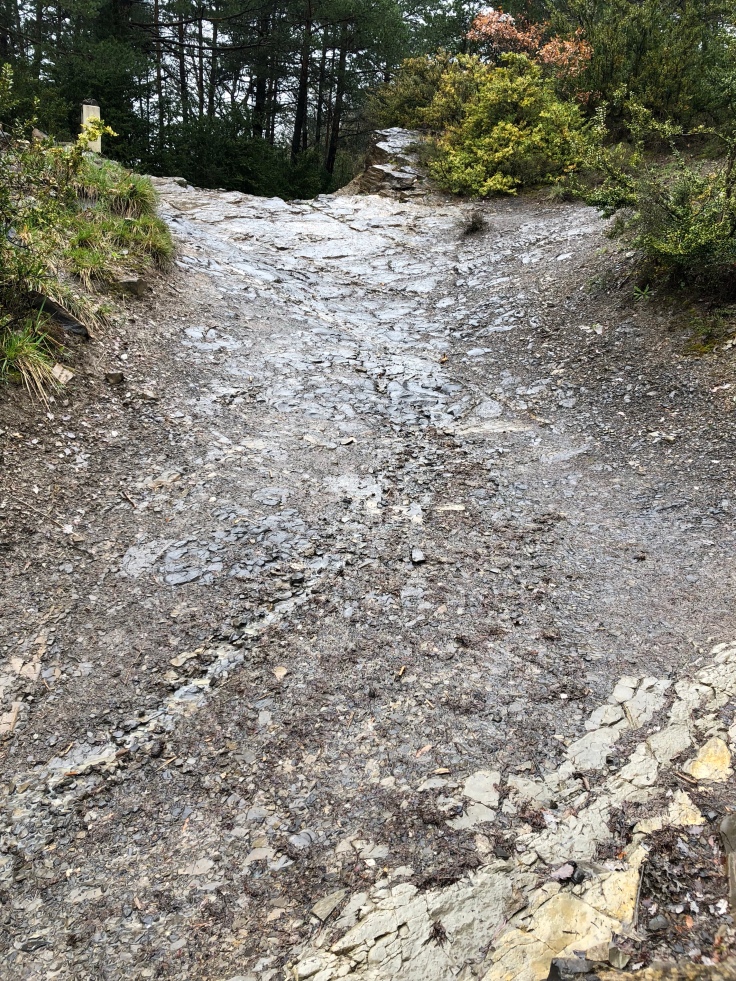 I rolled into Zubiri without incident because of my walking poles — I’m convinced! I tripped over multiple rocks, started to slip and fall multiple times, and generally had to “turtle” my way down the mountain. It was so wet, my earbuds were starting to short out. It was so wet, my water-proof poncho let my sweatshirt get soaked underneath:

But I made it!

Here’s the town welcome wagon right next to that sign: 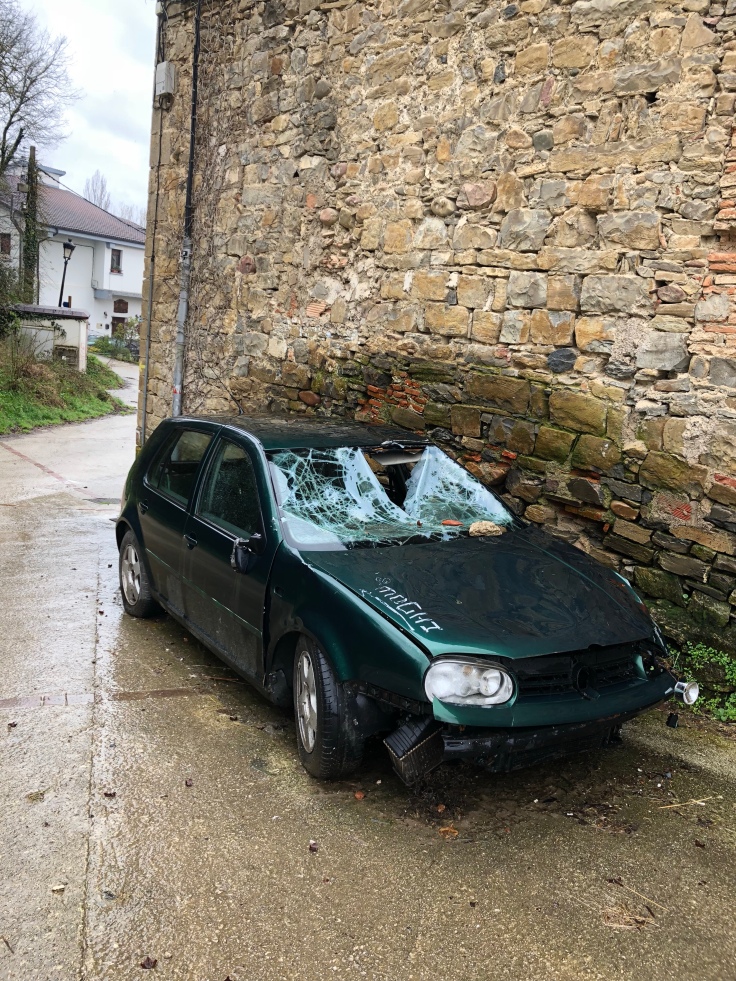 And look what song came on just as I reached the sign! 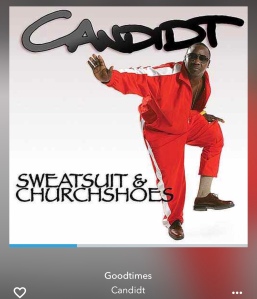 Thank you, Joe, for reminding me we’re going to have a good time!

I ran into the Texas sisters as soon as I walked across the bridge. Which bridge? This bridge! Check out that flooding! 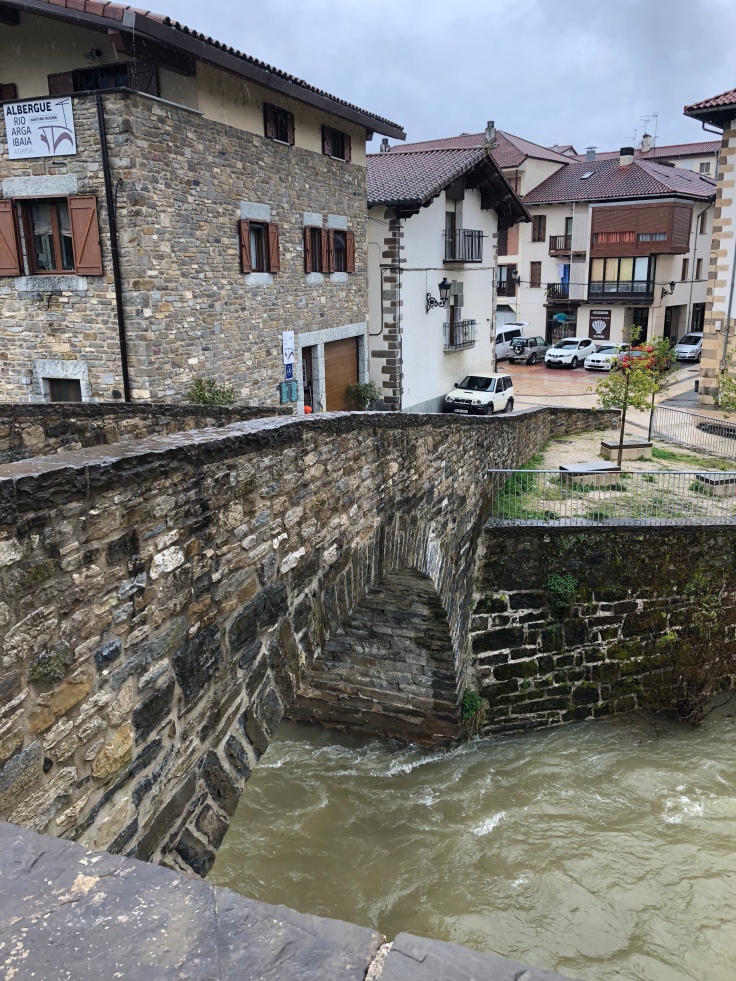 The sisters told me that the footbridge further down the path was impassable and that the townspeople were telling them to walk the highway instead. But then others were telling them not to walk the highway because there’s no shoulder and it’s extremely dangerous. We walked down to the tourist office to get an official word… closed because it’s Sunday. Then Wilma and Kitty caught up with us and showed me a picture posted on a German Camino group they belong to — it was a picture of the river completely over the path further up. That was enough to convince me to stay in Zubiri tonight despite it putting me behind schedule. There is just no reason to tempt fate like this. I may have already cashed in all of my good luck quota for the day.

So I’m in Zubiri tonight, in the tiniest hippie drippy albergue you could imagine. There are German teens sitting in the front room playing guitar and singing. I also made more friends: Wilma and Kitty are in this room with me, as well as Bob from outside Toronto and Ian from Alberta. They all want to set out together for Pamplona in the morning. This will be my first day walking with a full crew (if there’s a path to walk on!).

Here’s a picture of bacon for my husband Al: 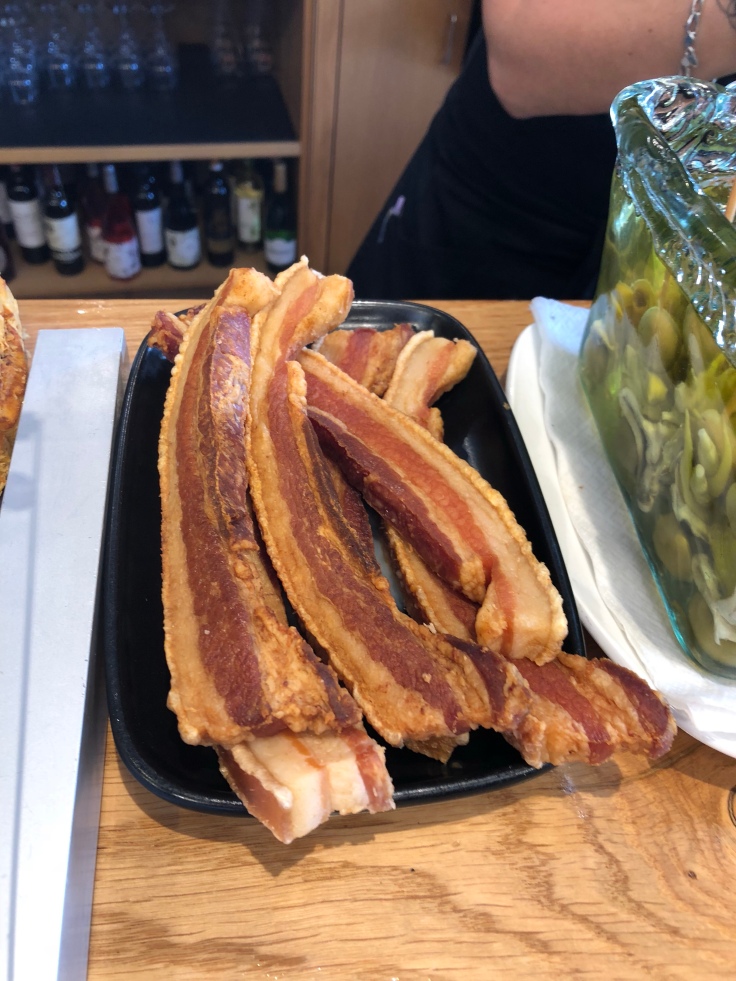 One thought on “Day 4: Slip Sliding Away”