The droghte of march hath perced to the roote.

I kept thinking of the first few lines of the prologue of the Canterbury Tales today (and to be fair, I was often reminded of them by other Americans I would meet who would immediately launch into reciting them if it came up I used to be a medieval lit teacher – I’m so glad I never made my students do that).

I was awake at 5:00 am once again, but only because the three men in my little 4-person bunk unit in the albergue were up and rustling around with their stuff. To confirm for my shocked American friends, two nights in a row I slept next to and below strange men in these large dormitories called albergues. No problems at all. No one is phased. No one makes a big deal out of anything. The mutual respect and laid back attitude about co-ed bunk rooms is refreshingly NOT American. We get so hung up over just gender-neutral public toilets… 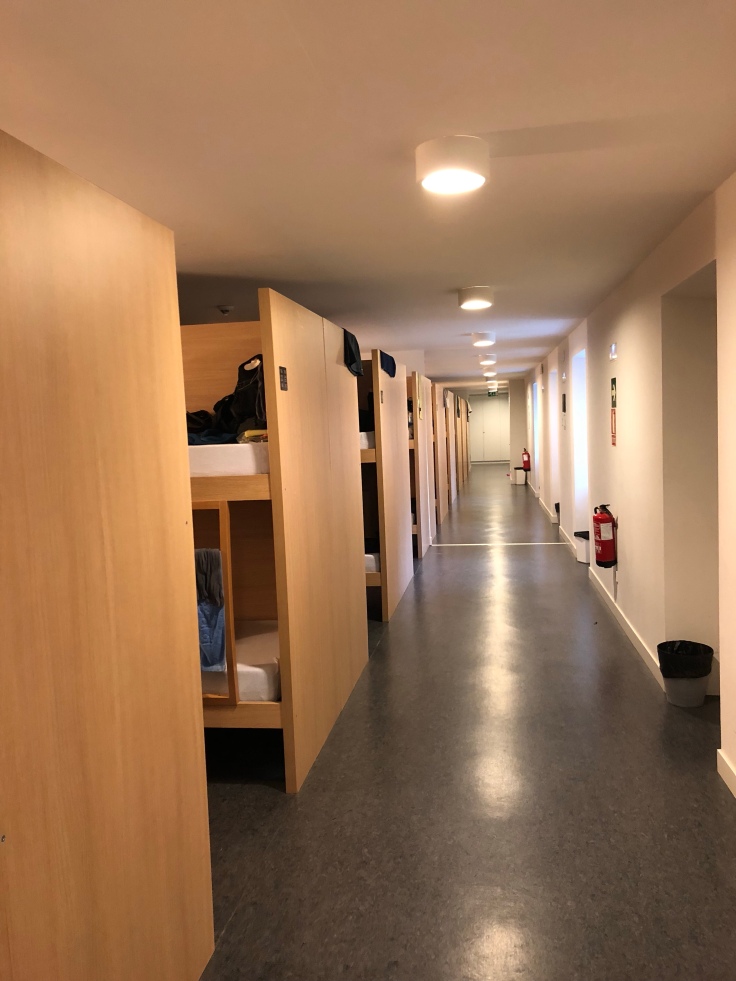 Mutual respect unless the others are waking you up at 5:00.

Back to Chaucer, the April rains came today (just as I see it rained on my Seafair family at the Daffodil Festival parades back in Washington).

After the drought of the previous two days — the excessive heat, the mountains, the sunburned arms, the exhausted and broken legs — I welcomed the rains with open arms.

With the April showers sweet came a day of amazing friendship building as well.

I left Roncesvalles with Kathleen from Australia, and we were practically skipping down through a wooded path together. She is a therapist who just sold her practice to make a world journey of the Camino, other parts of Europe, India, Bali, and some other destinations. When she asked why I was walking the Camino, I felt a little sheepish. After all, I have met dozens of people who are walking for atonement or to end chapters in their lives after divorces or the deaths of spouses, children, etc. I’m just walking because I didn’t die two years ago. Kathleen and I had a really great talk about trauma and how it affects people, how they deal with it, and how it changes them. It made total sense, especially since my own doctors in Seattle keep telling me I show signs of PTSD (because I’m now a bit of a hypochondriac worried about when the pericarditis will come back and obsessed with how to prevent it). Great talk, Kathleen!

Here’s a beautiful church we passed in the very next village called Burguete. Does anyone know what these trees are? They’re everywhere!: 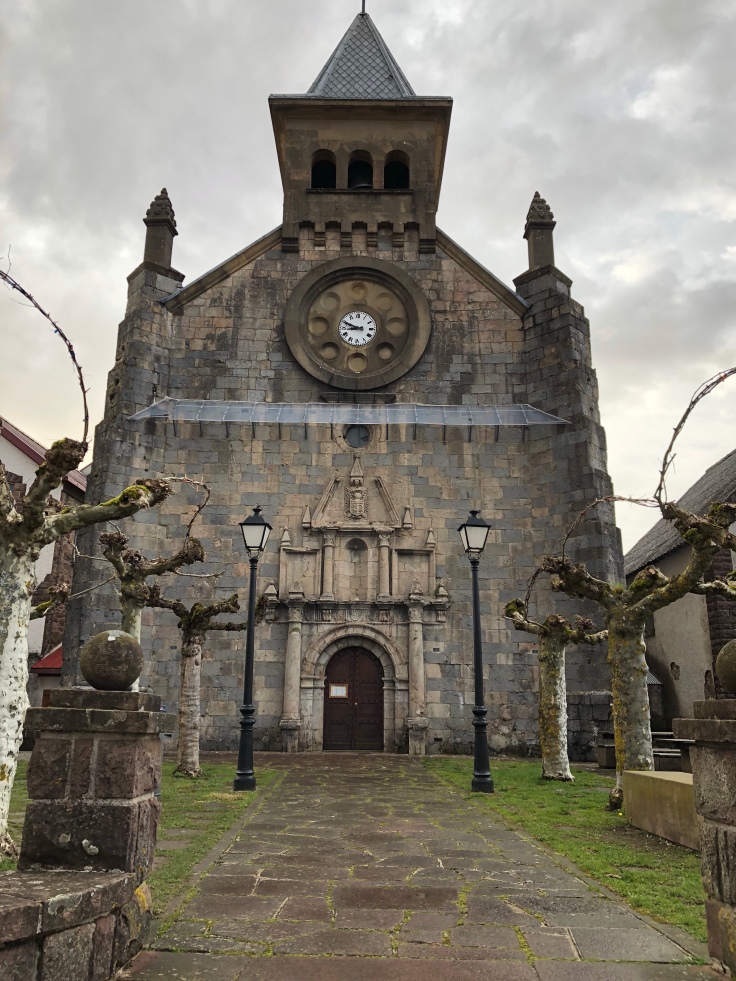 We stopped next to a farm so she could adjust her pack, which these cows found fascinating. Every one of them turned their heads to watch us. 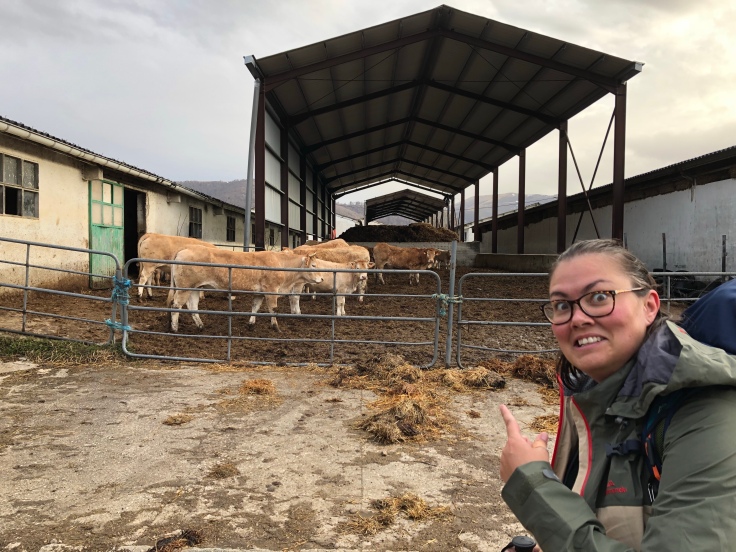 We parted ways in the next village of Espinal because I needed a pit stop and some coffee from a bar we passed. We agreed to meet in a town called Bizkarret later.

I’m so glad I stopped because who rolled into my view just as I finished my coffee? My friends the Texan sisters, Sally and Amy! We ended up walking together the rest of the way to Bizkarret to meet up with Kathleen. It was rainy and gorgeous. 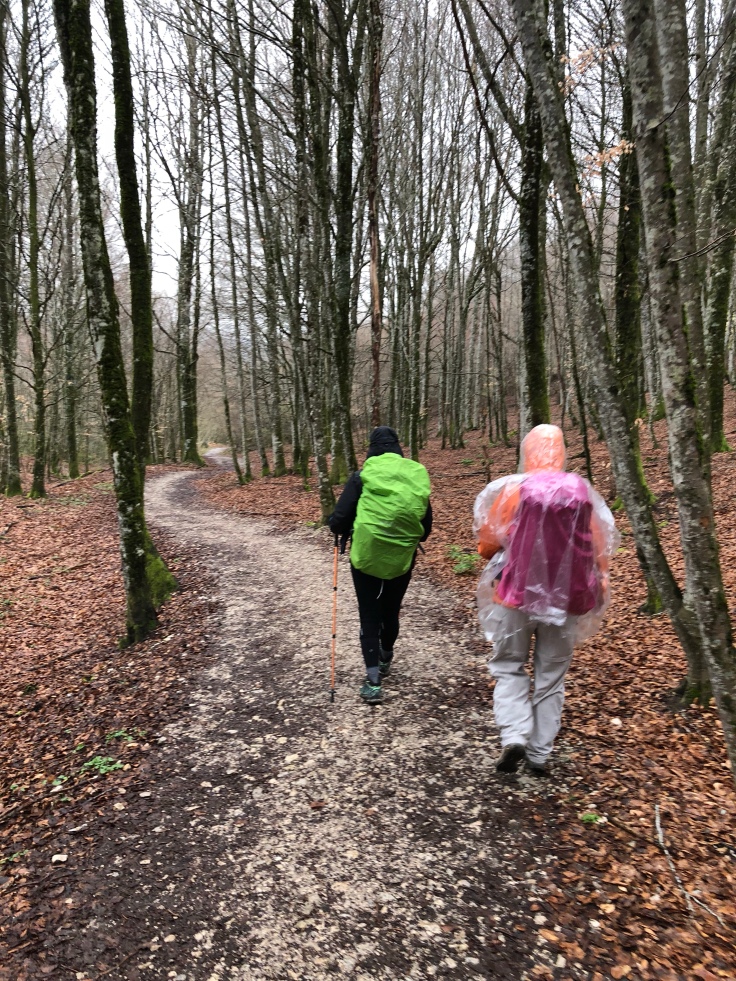 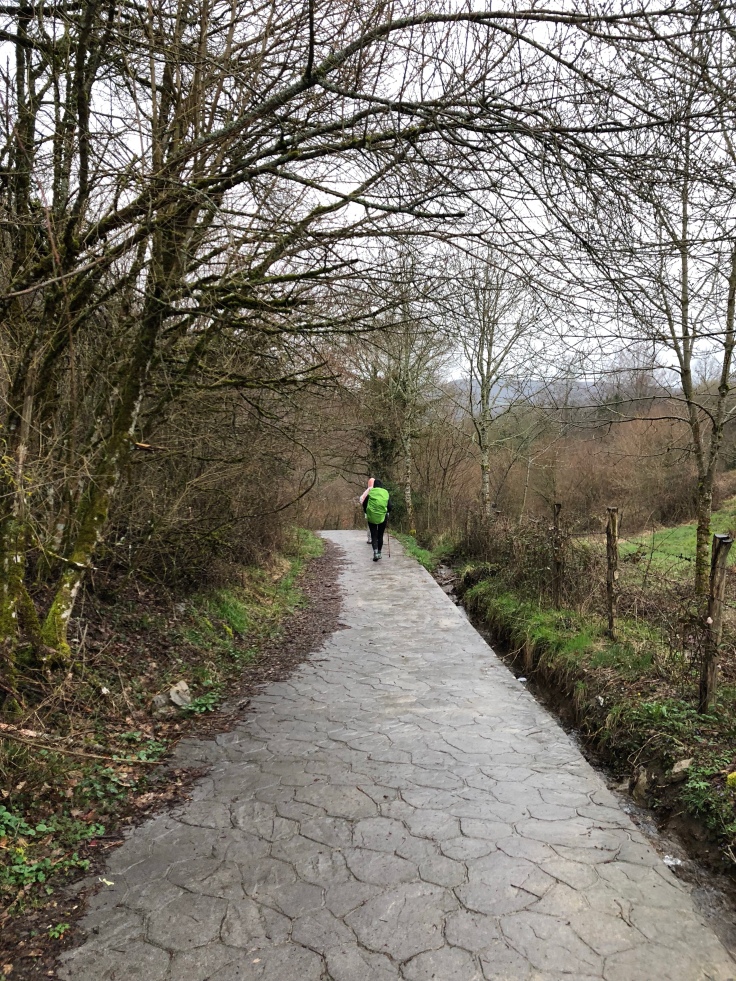 There were a lot of stone paths and stone footbridges today, and with the rain they were all very slick. Luckily my ankle made it safely over all of them… except this one was right next to a road bridge, so I decided why chance fate if I can walk the safe asphalt. Plus, I had a great view to watch the sisters cross it.

We rolled into Bizkarret and passed the B&B we knew Kathleen had made a reservation with. Ok, decision time: do we continue another 6 miles in the rain to the next town, or do we stop here since our bodies still ached from mountain climbing?

Next thing we know, Sally and I are barging into this B&B asking for rooms (with both parties using the Google translator app on our phones to communicate). I am so glad we did! We got private rooms with a shared bathroom, €35 for me and €50 for the sisters. Cheap by Seattle standards, but more than the giant dormitory albergues. It was soooo worth it!

Warm fireplace in the living room, the use of the washing machine, amazing friendliness of the hosts Elsa and Jorge, and the best meal I’ve had all week! The only other pilgrim here tonight is Stewart, an American former lawyer who grew up in Venezuela and now lives in Antigua. No Kathleen! She texted me later that she ended up going to the next town after all. I will see her in Pamplona in a day or two.

I didn’t take any pics of any of this because I just wanted to enjoy it. I’m also a bit nervous about taking my phone out for everything because those I’ve befriended know I’m keeping up a blog. In fact, a few times people have said “please don’t blog this” about whatever we’re discussing. Of course I wouldn’t invade people’s privacy like that anyways, but I think this is part of the backlash to our hyper-connected, hyper-exposed social media world.

It is interesting that the people I’ve bonded with are those I met in the first two days: Sally and Amy in Bayonne trying to get to SJPdP, and Kathleen, Stew, and John in the albergue in Valcarlos. We’re all on the same pace on the same path (but for very different reasons). Buen Camino!