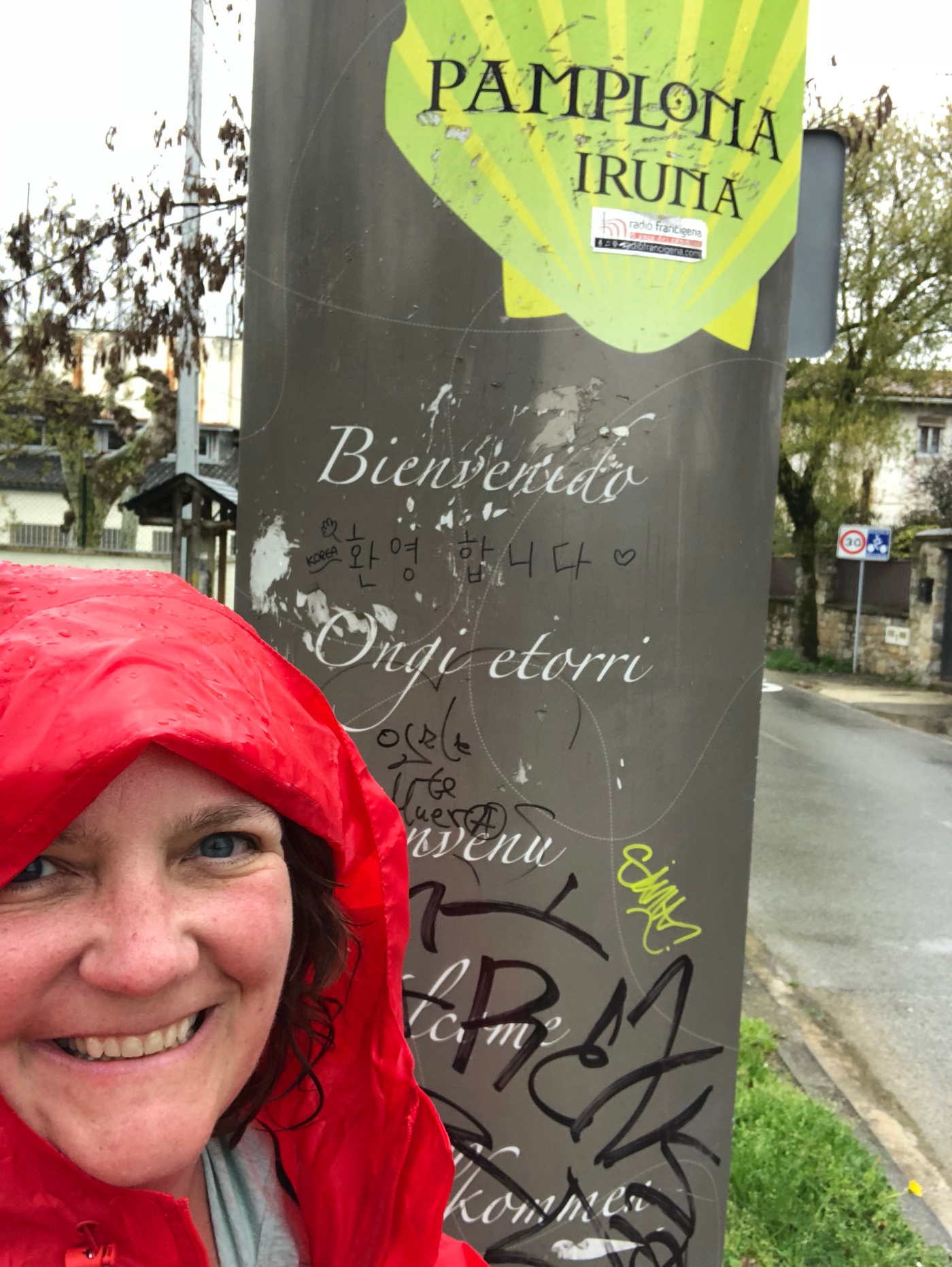 Never in my life have I ever just walked down a mountain and strolled into a major city before. Never. What a strange experience to go from muddy hills/mountains/flooded paths/rushing creeks to… city. The metropolitan areas I know well must have an edge somewhere as well. Where exactly is the edge to the Seattle area, or Portland, or NYC? Does anyone just walk in?

When I finally reached the edge of metro Pamplona, I was greeted with a very famous medieval bridge and a wonderful little church with attached albergue. I didn’t stay there, but remember there is an albergue on the bridge for later in the story. 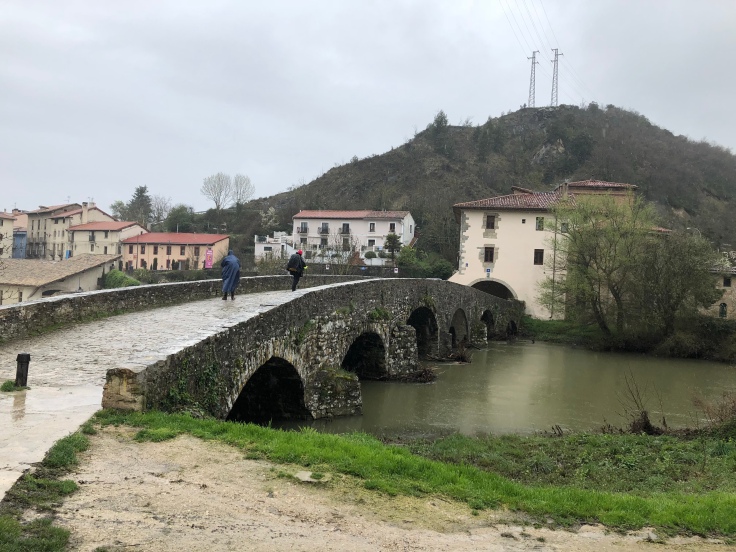 Suddenly I’m in a city. Technically it’s a suburb of Pamplona, but I don’t care. There are sidewalks, businesses, busses, people bustling about. I’m finally at ease.

I’m back in my natural surroundings!

There also was a cash machine. With the ATM broken in Zubiri, I reached this city with less than €2 in my pocket. I’m amazed I made it a week on €300 cash, but I was sweating it a bit towards the end.

Note in this last photo the mud caking the inside and back of her shins. I saw a LOT of pilgrims limping into town with similar mud patterns on their pants: legs, hips, buttocks, pack covers. How in God’s name have I managed to not fall yet? I still was slipping and sliding around, and there was one point the mud path was so narrow that my right pole was sliding off the trail down the hill. Yet still I have not spilled it. Al will tell you that I slid down four stairs on my behind in Paris last fall and had a painful bruise for days. That was inside a building in a city. I slip and trip just walking down my driveway taking the garbage out. How have I traversed these hills without losing it?

Don’t know… but I really need my luck to continue to hold.

Made it to the city border!

Alright, friends, now I’m about to get medievalist geeky on you. Look at these intact medieval walls (I’ve since discovered they are early 16th s, but I’m still excited to see them)! They remind me so much of my favorite UK city, York. My drenched heart was singing. 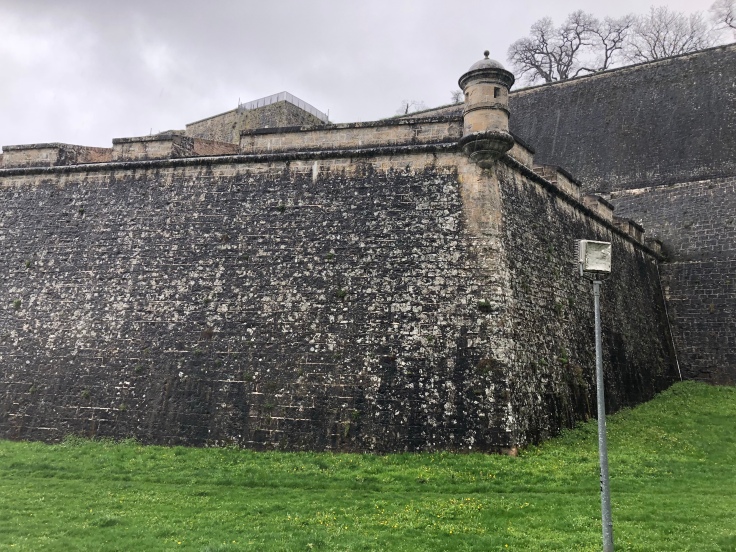 I didn’t take more photos walking in because it was DUMPING rain. You can’t really see the rain in these pics but trust me… it was bad! I’m starting to worry about my phone. I may start carrying it inside a ziplock baggie when I walk from now on (when it’s rainy).

Because I’ve never been to Pamplona before and I haven’t had the chance to soak in any history, I’m staying here two nights — leg rest! I found a hotel inside the walled part of town on Expedia a few weeks ago, and I’m in love with it. Check out the views from the two windows! Only €39 per night, too. I think my husband was worried I was serious when I texted him I’m staying put the rest of the week.

Oh yeah, it stopped raining and the sun came out, too!

A quick shower, a piling of laundry (which the hotel is washing for €6, almost the same as using the crappy washer at the last albergue), and I’m out the door to explore the city.

I really wish I didn’t have a language barrier, though, because I’m not sure what I’m looking at: 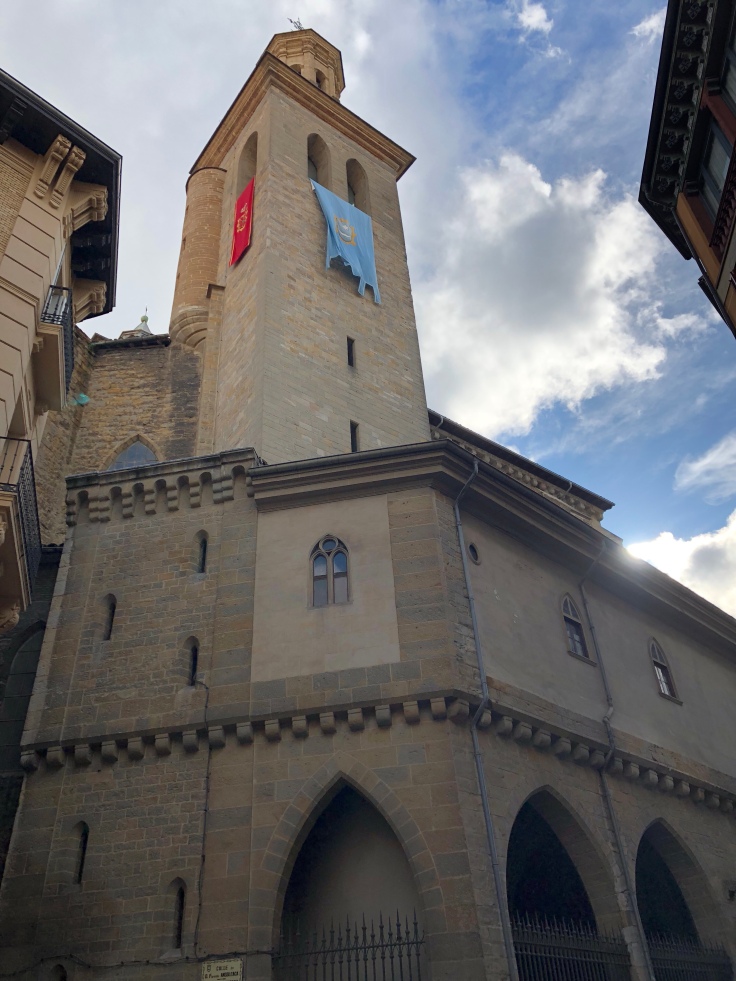 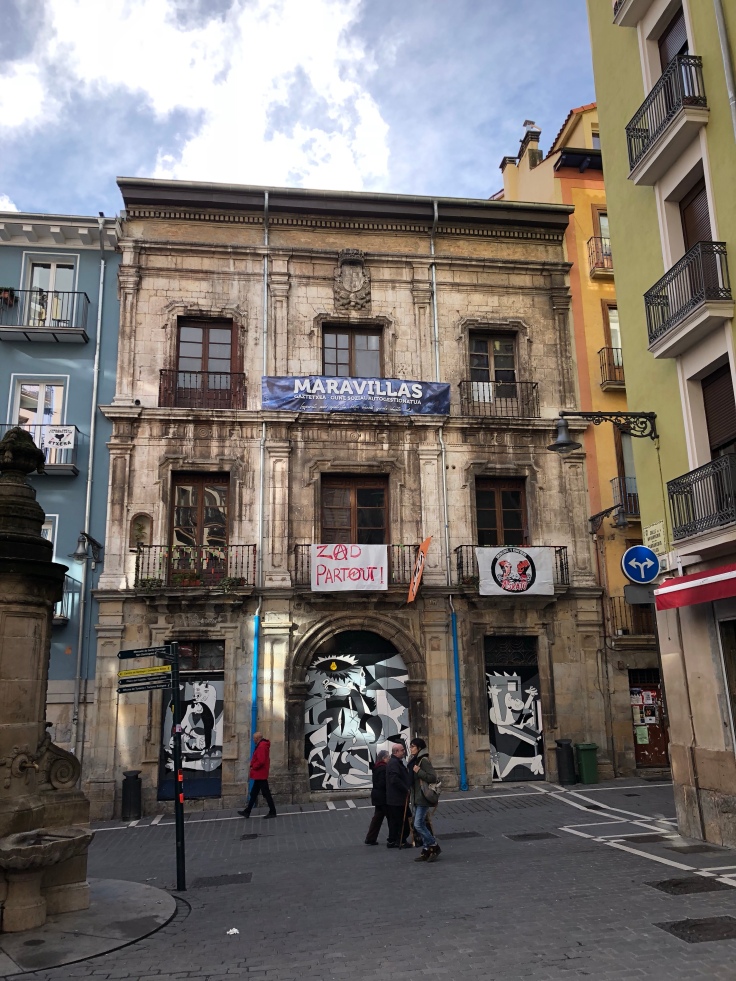 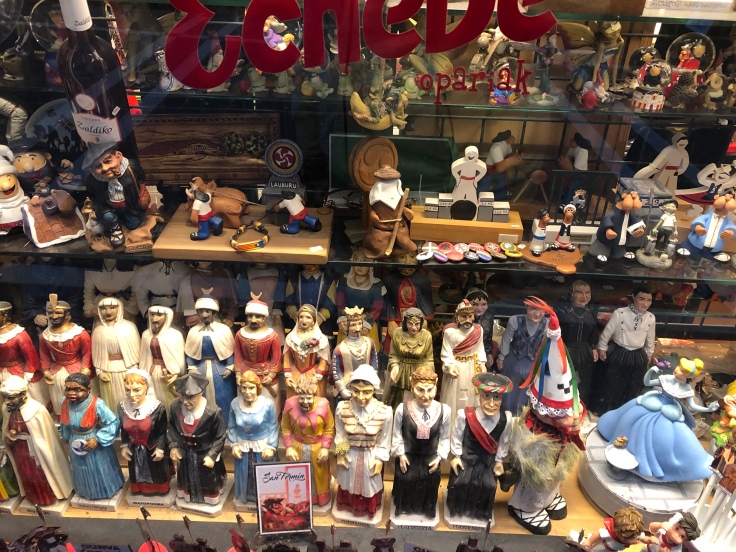 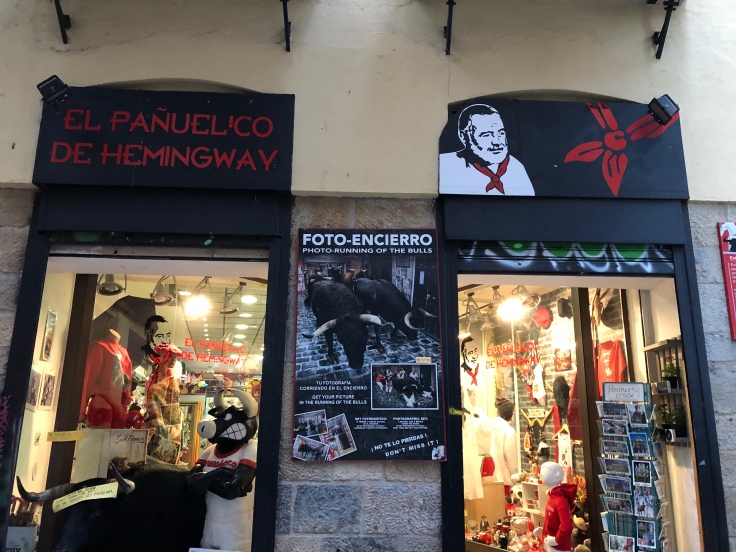 I found the church of San Fermin: 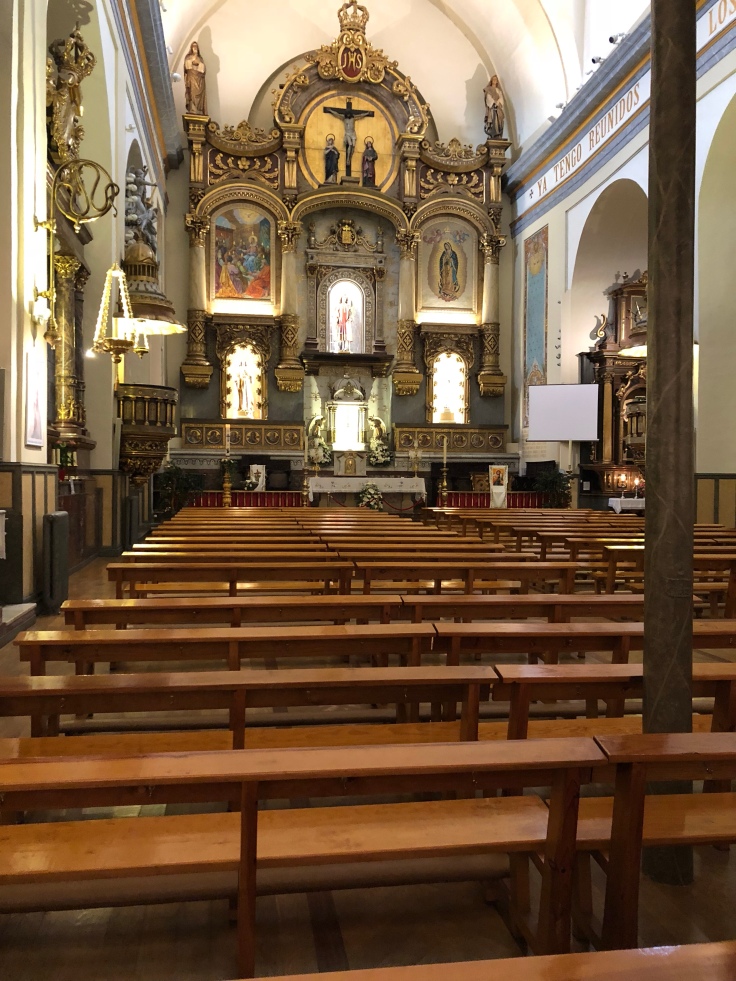 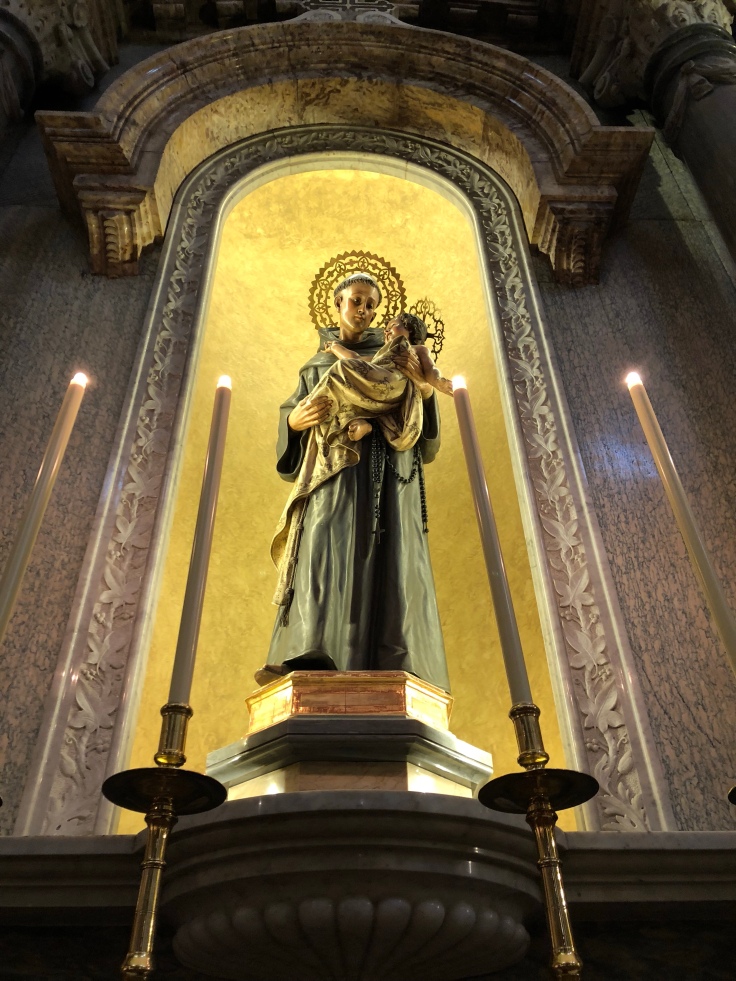 Hmm… something seems to be missing from this last picture. It’s a beautiful altar for a chapel, but…

I then found the tourist office where the woman told me San Fermin was moved to the cathedral for Easter and tonight was the night they move him back to his own church in a procession at 7. Be there and don’t be late. Ok!

I went to see where the cathedral was just to be sure, then started searching for a nearby place for lunch/dinner. I didn’t find a cafe as fast as I found something else.

Look who I bumped into on the street, who then joined me in the cathedral! 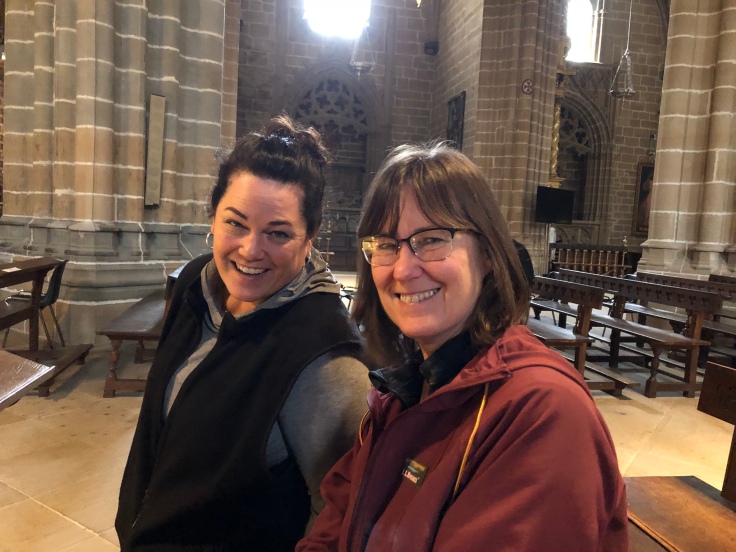 Hi Sally and Amy! You were a sight for sore eyes!

I will let them share their story of what happened when we split in Zubiri in the comments (it’s best in their own words, but remember that albergue I mentioned on the bridge at the edge of town. I also know they are following this blog which is how they knew I was in town somewhere. A&S, go for it in the comment section of how you got across that closed path and what happened next). We also ran into Kitty and Wilma in the bar where I was grabbing quick food. It’s amazing how we all lose and find each other again on the Camino.

We attended the San Fermin procession in the cathedral, but I must tell you that I have NO IDEA what was going on. It wasn’t mass, and every time the parishioners stood up or walked through the church, I kept thinking they were going to pick him up and head out the door any minute now… they never picked him up. It was clearly an important ritual but I can’t tell you anything about what was happening. San Fermin has NOT left the building. 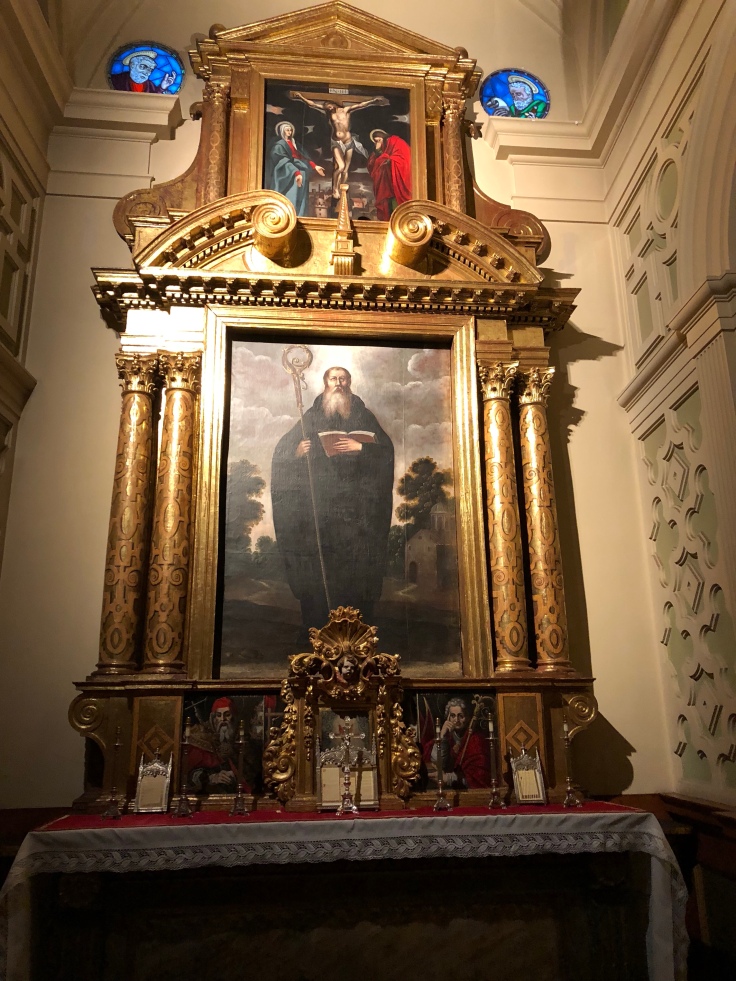 Everyone was posing for photos in front of him, so I decided “when in Rome…”

The Texas sisters are now officially one day ahead of me (again, wait for their amazing story to come), but they are planning to take a rest day every week. They will let me know where they decide to take a second night again and I will catch up to them. Buen Camino, amigas! 💗

Day 6: The rains are back with a vengeance! I’m so glad I’m not walking today, but I’m also very cold and tired of being wet.

I ran into Wilma and Kitty on the street as they were heading out: 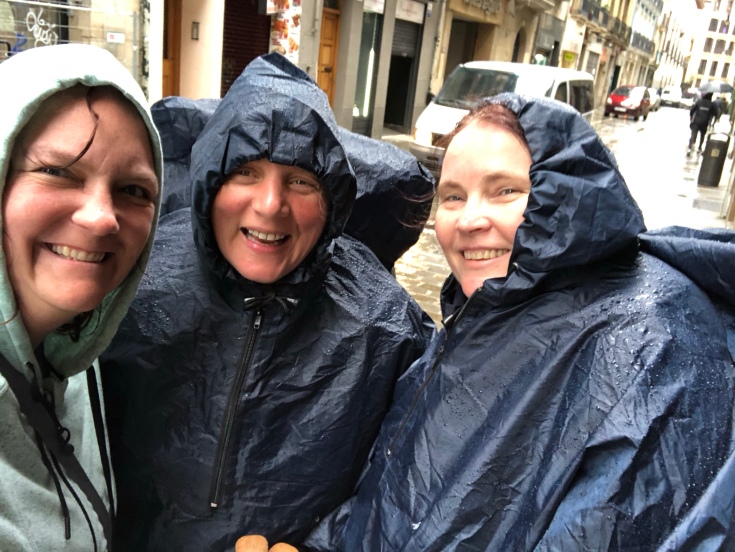 We agreed to meet later as well. Buen Camino, amigas! 💗

I’m really regretting ditching my heavy hoodie back in Valcarlos, but dumb me was tricked by the 80s weather back there. I need a coat!

I popped into a tourist shop full of plain red or white sweatshirts and fleece jackets, and the salesperson told me I could have any image on the wall put on it. This guy just screamed out to me. Yes, goofy Jen is back.

He is my spirit animal, a true badass who is going to finish this Camino and reach Santiago. He is also reminding me to continue to be a tough badass at home while I continue to labor to build sustainability for SCLS at work, and continue to fight the good fight against the sexism and bigotry that’s been in my face this last year. Everyone, be this bull, he takes no s***.

He needs a name. Make your suggestions in the comments.

I’m not even embarrassed to wear it on the streets of Pamplona. I’m much warmer now, thank you.

What I am embarrassed about is that I keep walking in circles and missing Plaza de Toros to check out. The universe was telling me to stop for lunch and wine. Fine, I can take a hint:

Anchovies and something unidentifiable, roasted red pepper, and lox. All delicious… but it was the lox that I got a second piece of. It’s raining so hard outside right now, I’m ok sitting here updating the blog and drinking wine.