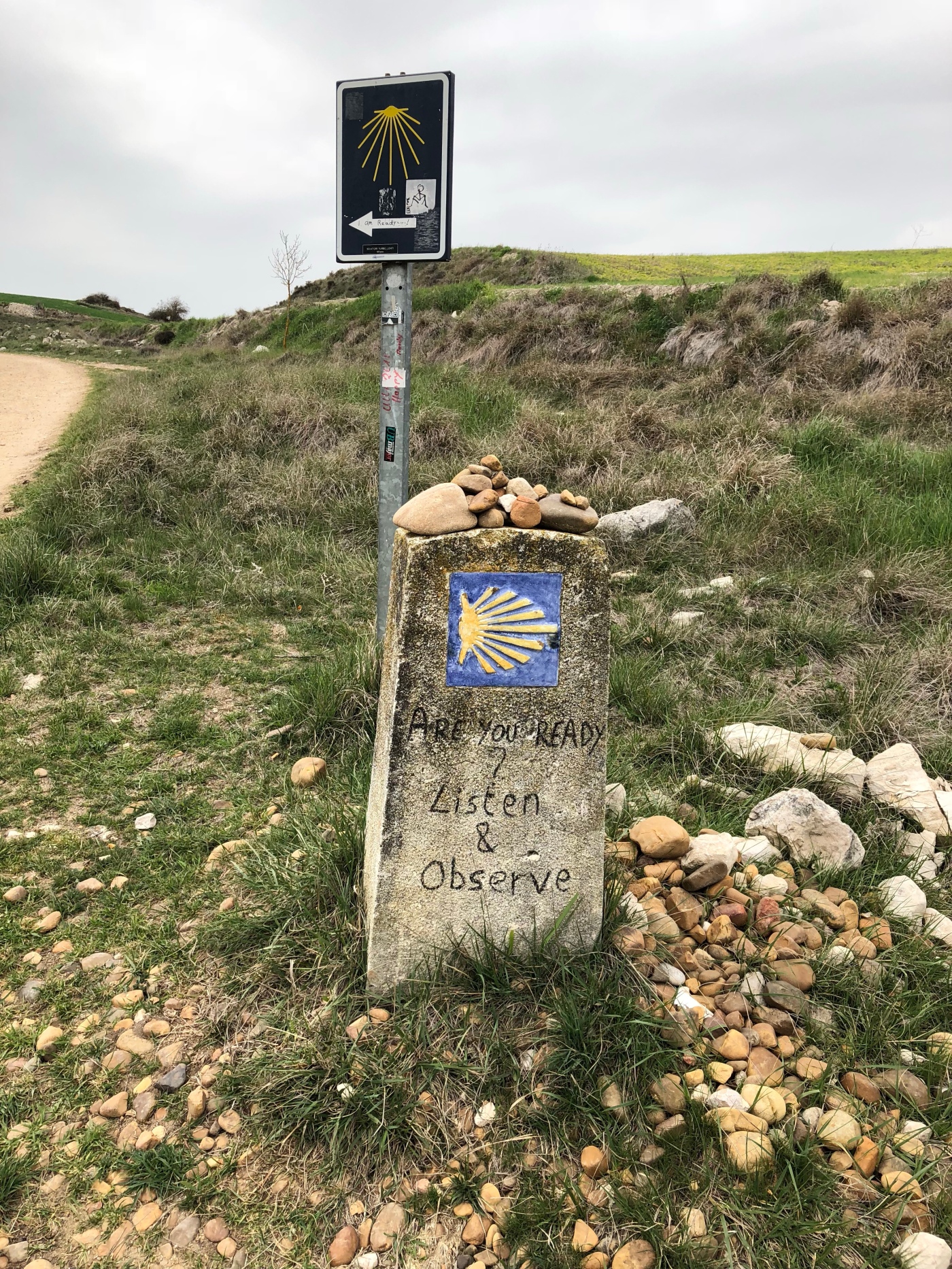 I didn’t think much of this stretch except “oh great, it will be nice and flat and easy.”

Then in the last few days I started hearing about Pilgrims who were just simply hopping on a bus to skip the next five days of walking. Why would they do that? Answer: the meseta.

Dr. Felix yesterday warned me about the meseta. It’s much harder than most people think it will be, he told me. Stay focused. Be strong.

But today I get it.

What is this strange God-forsaken place?

First a few pics before things got weird:

A prison with some serious Foucault fixations (or does the prison pre-date Foucault and is actually one of his exempla? It’s been years since I read the book…): 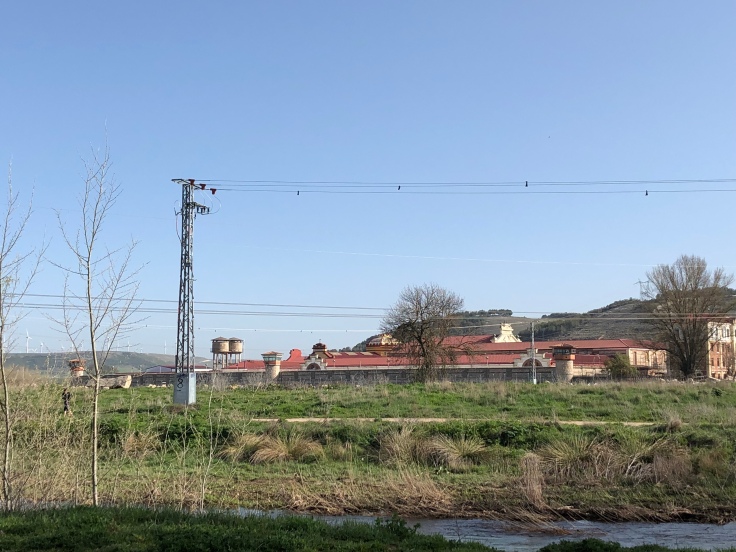 A wonderful Romanesque Paris church with a nest on the bell tower. The bird? A huge black and white heron (no good pic of the bird, but I saw her): 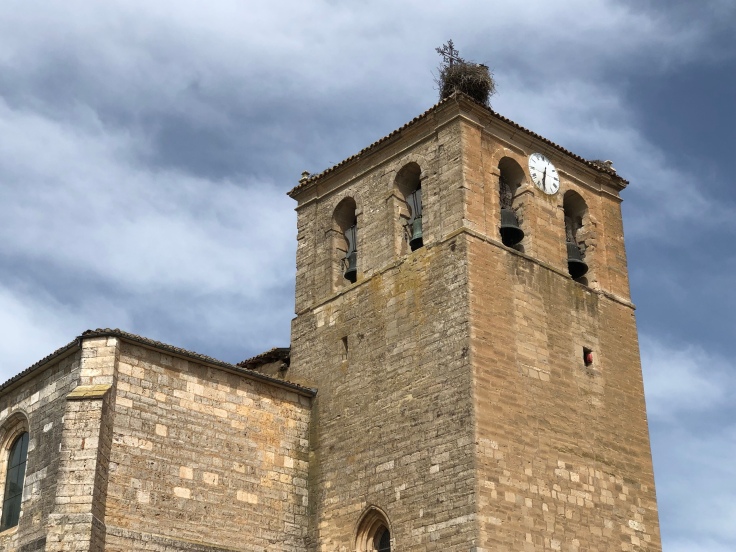 I finally decided to take a pic of this to share: every single village, hamlet, and city in Castilla y Leon has a Google map picture posted at all streets leading into it. 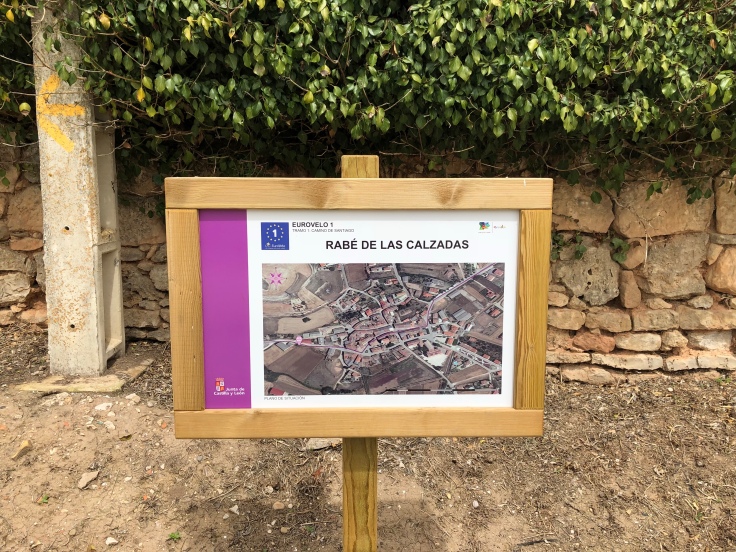 This tiny little 13th century church is the last sign of civilization before I hit the meseta. 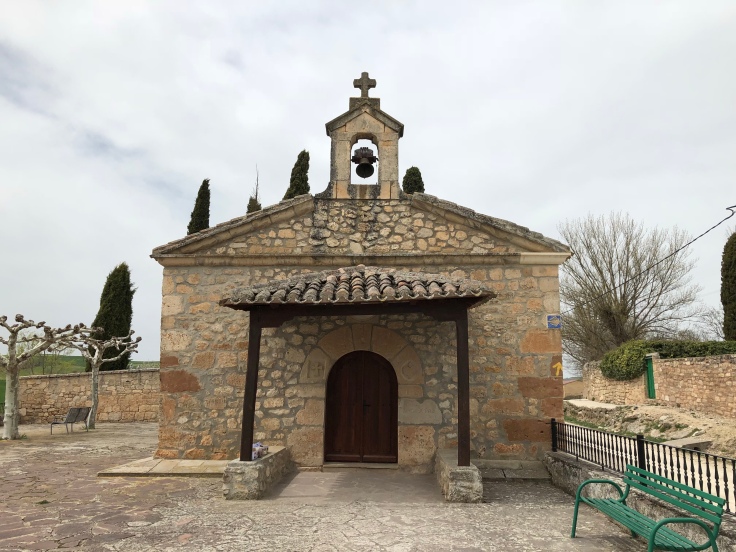 As soon as I passed the medieval church, the sky turned dark gray as if a storm were rolling in to Seattle. I was grateful that the sun was blocked and it became much cooler, but it did feel very surreal. What the heck is this place? 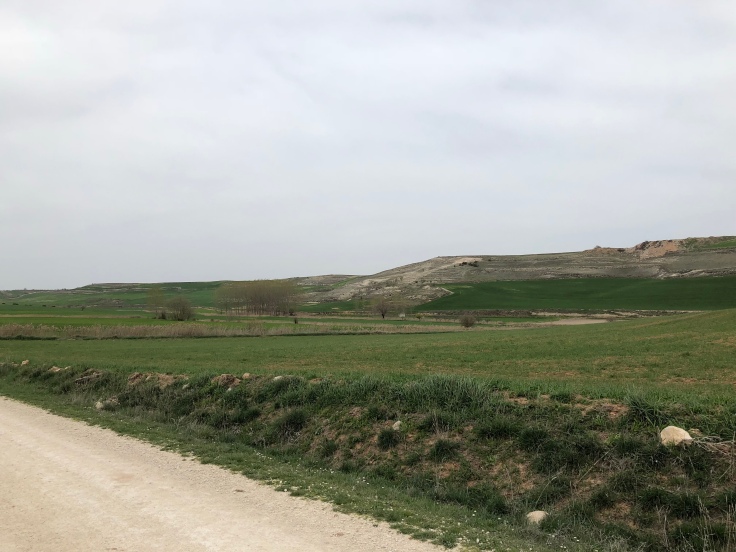 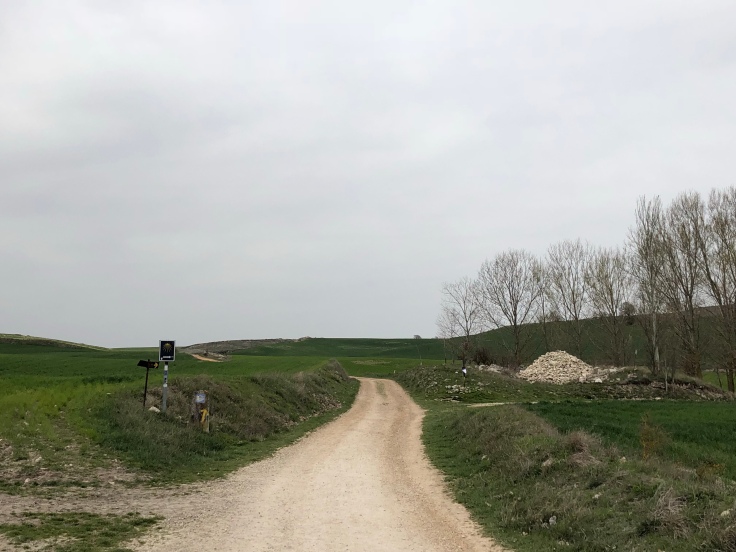 Such a weird feeling, like walking on the moon. I was trying hard to just keep chugging along as the path continued to climb. Then I reached this way marker with strangely-time English graffiti: 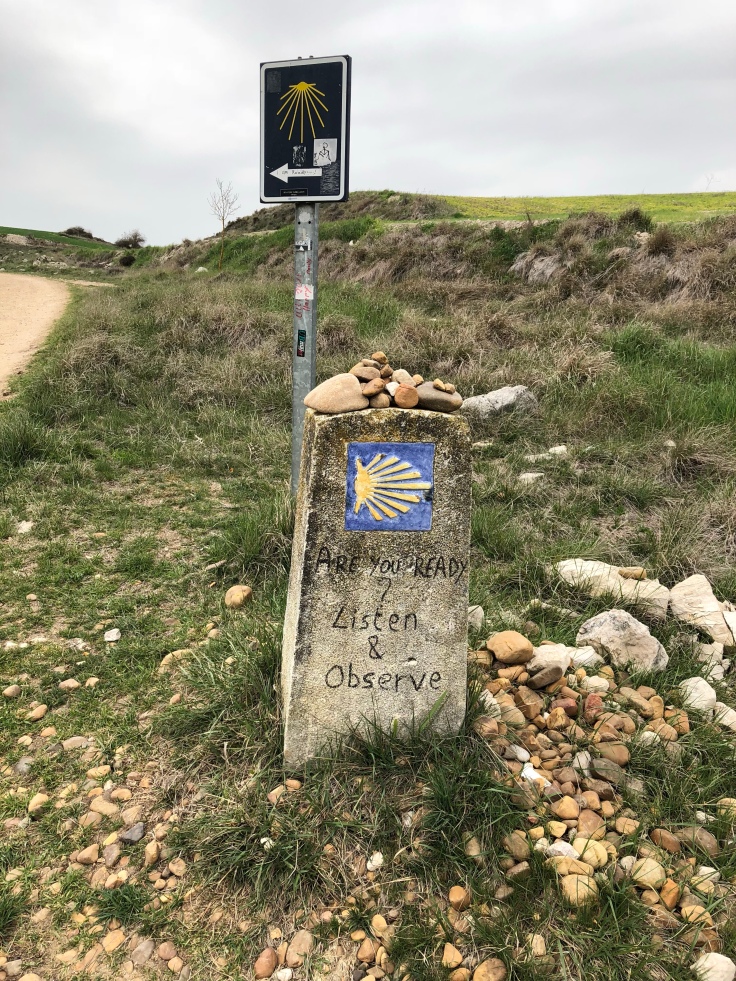 If I have learned anything in this journey, it’s to pay attention to signs and signals.

I turned off my music (Jen Walking: classic 80s new wave and R&B playlist), took off the earbuds, took off my sunglasses, and started listening and observing.

My goodness this place is kind of creepy. And don’t the rocks look like the piles of oyster shells you see along the Washington coast? 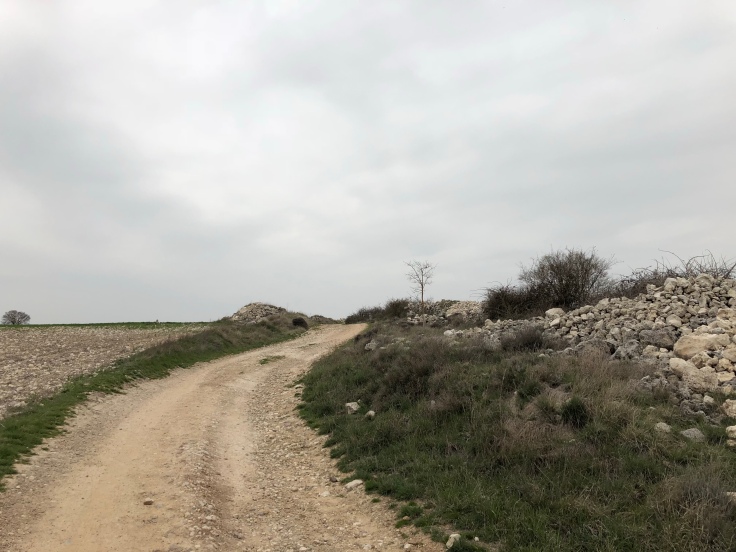 So I listened and observed as I continued to walk (as fast as I could, honestly).

I heard everything on my backpack clicking and clanking.

I heard my own footsteps on the gravel path.

I heard birds far away. Nothing was really close to the path.

I observed the sky seem to get darker and grayer.

I observed a wind that picked up and was actually blowing through my shoes (for which I was grateful).

I observed my own panicked breath when it dawned on me that there ain’t NO ONE out here — in front of me or behind.

Did I die? Is this purgatory or hell?

Then two kids on dirt bikes came zipping up behind me. No, I’m not dead. This must be what people are referencing about the meseta.

Look! Civilization and my end point! Oh, look at that descent (I had to take it very slowly — wish I had one of those dirt bikes): 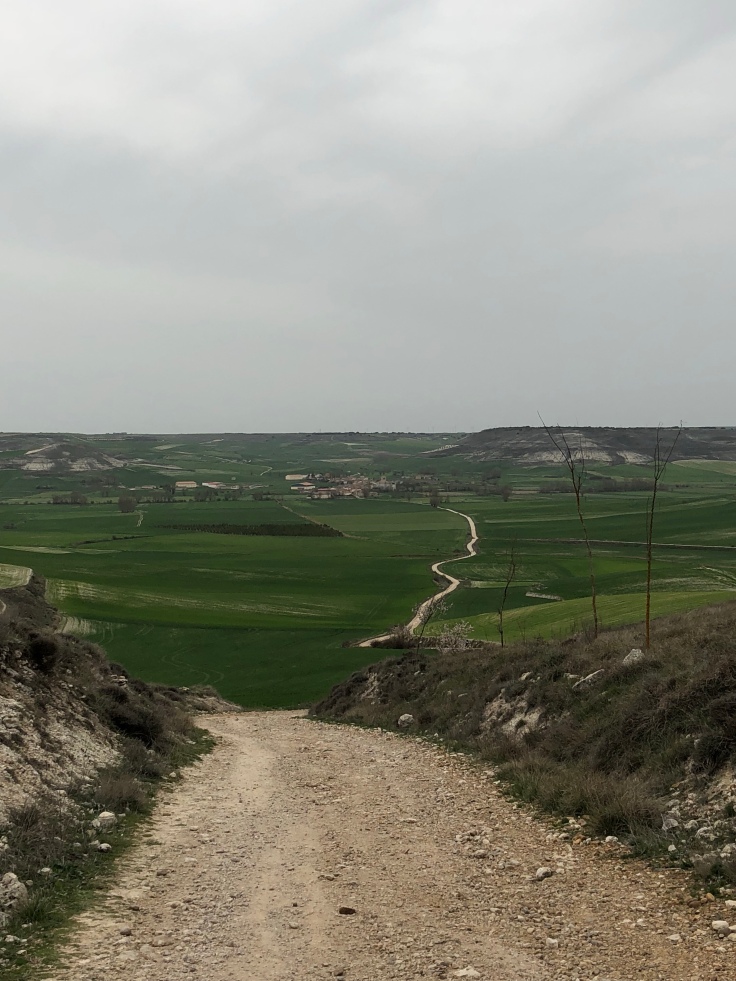 When I reached my accommodations, there was a woman about my age being helped by the host. Apparently this village was completely sold out of all beds and rooms, and so he was calling another guesthouse 7 km further down the road. I felt sorry for her. It turns out, Burgos is a very popular starting point for pilgrims who do not start at Saint Jean. After what I just walked through, that seems insane.

Check out the main street of Hornillos: 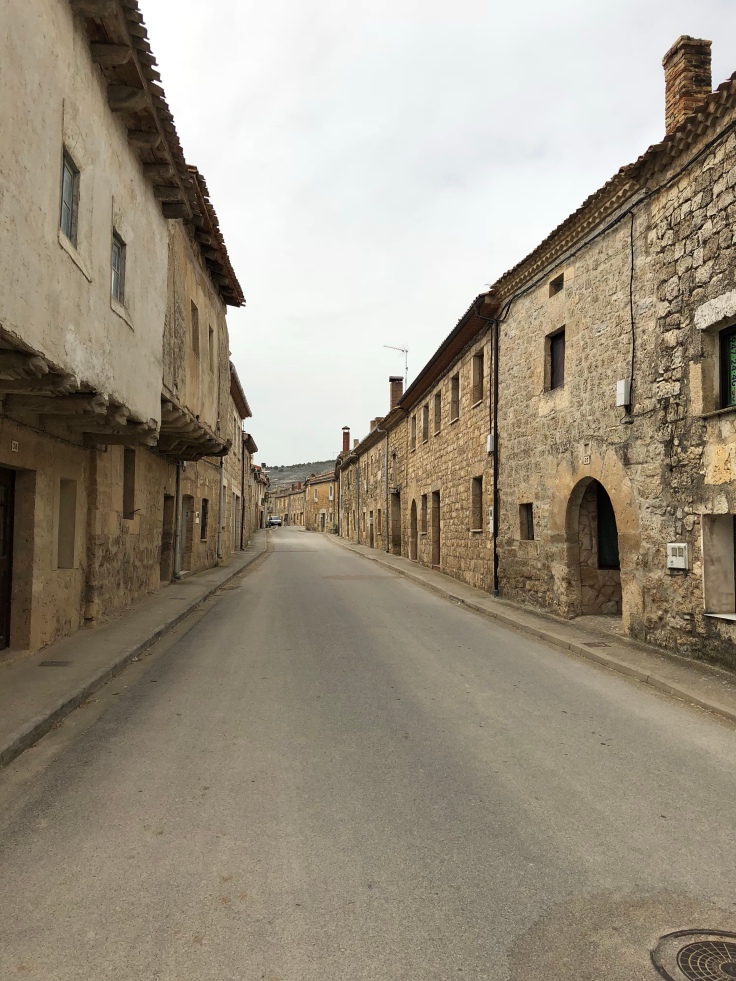 I had a lovely time drinking wine and chatting with Chantal from Australia, Dorothy from E. Canada, and Frank from Germany. There’s nothing else to do here except drink wine/beer. What a strange place.

Also, the only traffic is tractors. No cars. Here is Chantal trying to take a pic of Saturday evening traffic: 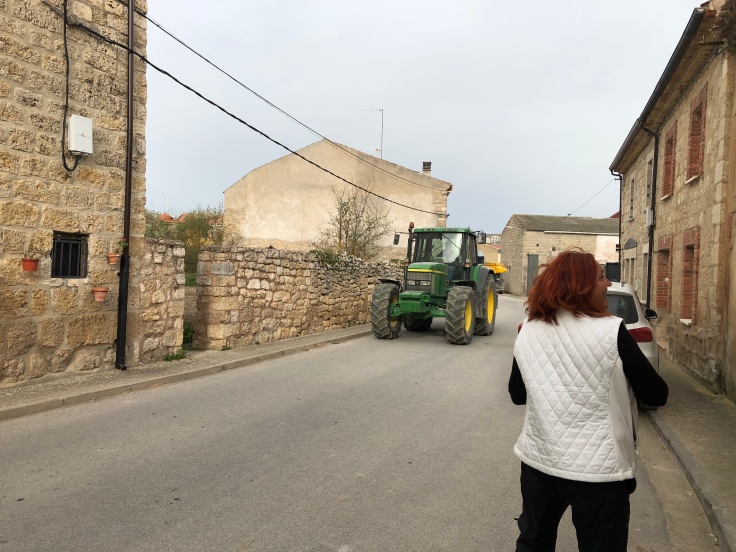 How many more days of this meseta moonscape altered reality place?

One thought on “To Hornillos del Camino”